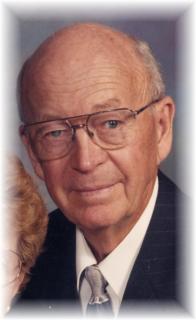 Celebration of Life Services: Will be held on Monday, May 7, 2012, at 10:30 a.m. at the Immanuel Lutheran Church in Greenfield with burial at a later date in the Old Union Cemetery, Rural Orient, Iowa. Full military rites will be held after the service at the church by the Fontanelle American Legion Carlson Post No. 247 and Greenfield American Legion Head-Endres Post No. 265 and V.F.W. Post No. 5357.

Visitation: Will be held on Sunday, May 6th from Noon to 6 p.m. with the family greeting friends from 4 to 6 p.m. at the Steen Funeral Home in Greenfield.

Memorials: May be made to the Harold Wallace memorial fund to be established by the family.

Harold Merle Wallace was born September 3, 1927, in Menlo, Iowa, the son of Clyde Charlie and Ollie Blanche (Dunkerson) Wallace. He passed away on Thursday, May 3, 2012, at the Winterset Care Center North in Winterset, Iowa, at the age of 84.

Harold grew up in Richland Township in Adair County, Iowa, and graduated from Richland High School in 1945. He served his country in the United States Navy from 1945-1946, serving on the USS Iowa. On September 8, 1947, he was united in marriage to Mary Joan Mangels in Hiawatha, Kansas. To this union four sons were born: Doug, Ted, Mark and Kurt.

Wally farmed in Adair County, was a janitor at the Greenfield Elementary School and drove the school bus for 18 years. He enjoyed farming and cleaning, playing cards, baseball and softball, loved to mow his yard and eat ice cream. He was a member of Immanuel Lutheran Church, Fontanelle American Legion, and treasurer for Crime Stoppers. Wally was also a volunteer for Time Out for Jesus and also at the Greenfield Manor's Mini Church. He was an elder at Immanuel Lutheran Church and served on the ASCS board. Wally worked for many years as a Wilson Seed Dealer.

Wally's memorable quotes: "There is no hurry on the farm," "Do you think the rain will hurt the rhubarb?" and "I'll see you in the movies."

He was preceded in death by his parents and brother, Harley Wallace.

To order memorial trees or send flowers to the family in memory of Harold Wallace , please visit our flower store.
Send a Sympathy Card