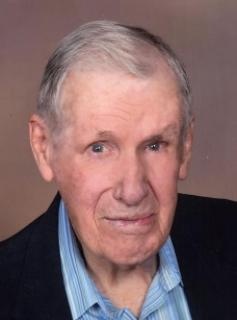 Funeral Services: Will be held on Friday, February 2, 2018, at 10:30 a.m. at the United Methodist Church in Greenfield with burial in the Greenfield Cemetery. A luncheon will be held at the church following the committal services at the cemetery. Pastor Eric Schubert will officiate the service.

Memorials: May be made to the Harry Ahl memorial fund to be established by the family at a later date.

Harry W. Ahl was born September 15, 1921, to Hjalmer "Elmer" A. and Eugenia M. (Ackerland) Ahl in rural Casey, Iowa. He passed away on Tuesday, January 30, 2018, at the Good Samaritan Society in Fontanelle with his daughter by his side.

Harry was born west of Casey being the second to the youngest of family of ten. The home was a brick house with five rooms and no electricity. Being raised in Adair County in several different locations he attended several different county schools ending at Grand River #3 for his 7th and 8th grade years. He never went on to school after the 8th grade because he couldn't afford it so he had to go to work, helping neighbors, getting 25 cents a day. At 17 he started driving a truck for a trucker from Stuart.

On December 18, 1941, Harry married LaRue Madison in Rockport, Missouri. They started farming on the Madison family farm in Eureka Township. To this union one daughter, Karen Irene was born. Harry farmed for 23 years.

Harry and LaRue left the farm and moved to Adair, Iowa and started work for Iowa Star Silo. He built silos for 8 years and during this time he traveled to many different states and being a foreman of his crew. After Star Silos was dissolved they moved to Greenfield in 1978 to make their home. They became members of the United Methodist Church. For 8 years Harry worked for Huff's Welding. Still not ready for retirement he was part owner of a salvage yard in Orient.

In his retirement years Harry and LaRue traveled to many places in the United States and Hawaii. They both enjoyed going to auctions and garage sales. As a young man he started collecting coins and did so up until the final last months. Dancing, playing cards, watching the Cubs and I.S.U. play sports on T.V. were some of his other interests.

But one of his greatest joys was watching his grandchildren and great grandchildren grow up and be a mentor to them. Being able to go to all sports and other activities they were in brought him much happiness. He never left the farm interest. He continued to work with Kevin on the farm even riding the big combine at age 96-One Last Time!

He was preceded in death by his parents; wife, LaRue Ahl; brothers, Arnold, Ted, Bernard and Leonard Ahl; and sisters, 2 in infancy, Margaret Jarvis, Irene Ventura and Carrie Sturdy, Jr.

To order memorial trees or send flowers to the family in memory of Harry Ahl , please visit our flower store.