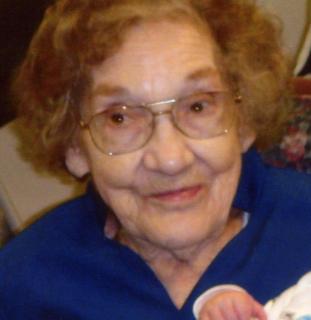 Memorials: Memorials may be directed to the Hazel Raths memorial fund to be established by the family at a later date.

Hazel Avis Raths, daughter of Zennie and Edith (Morgan) Main was born on January 13, 1925 in Keldron, South Dakota. She passed away on January 24, 2017 at Adair County Memorial Hospital in Greenfield, Iowa at the age of 92.

Hazel was raised and educated in Adair County, Iowa. She attended country school in Richland and graduated from Greenfield High School. After high school, she moved to Seattle, Washington where she was a teletype operator for Western Union. She also attended modeling school and worked for the airlines. On February 14, 1952, Hazel was united in marriage to Howard Raths. They lived in Fort Worth, Texas and then moved to Kansas City, Missouri. To this union, there were three daughters Valerie Welsch, Stephanie Baber and Sherri Warrior. Hazel worked hard all her life and was very dedicated to her three children, eight grandchildren and fourteen great grandchildren. She enjoyed sewing, arts and crafts and playing bingo.

She was preceded in death by her parents, sister Carrie, brothers Lyle, Richard, Beryl and Willard.

She is survived by her three daughters, Valerie Welsch of Greenfield, Stephanie (Rollie) Baber of Carlisle, and Sherri Warrior of Fontanelle, one brother Leslie Main (Roxanne) of Texas, sister-in-law Kerrie Main of Phoenix, Arizona, grandchildren, great-grandchildren and other relatives and friends.

To order memorial trees or send flowers to the family in memory of Hazel Raths , please visit our flower store.
Send a Sympathy Card