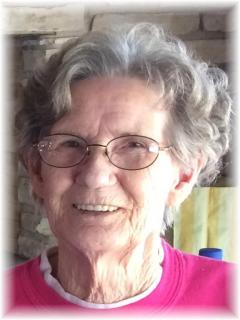 Funeral Services: Will be held on Tuesday, February 17, 2015, at 2:00 p.m. at the Steen Funeral Home in Greenfield with burial in the Greenfield Cemetery. A luncheon will be held at the Greenfield United Methodist Church following the burial. Pastor Eric Schubert will officiate the service.

Family Visitation: The family will greet friends on Monday evening from 6 to 8 p.m. at the Steen Funeral Home in Greenfield.

Memorials: May be directed to the Bishop Drumm Foundation (for Margery Court), 5837 Winwood Drive, Johnston, Iowa 50131.

Hazel was born September13, 1923 in Walnut Township near Peru, Iowa to Thomas J. Kephart and Marvie E. (Smith) Kephart. She attended rural school near Peru, Iowa. Hazel married Zara Elmer Snell on August 13, 1942, in Grant City, Missouri and made their home in and near Greenfield, Iowa. They were the parents of six children.

Hazel spent many summers gardening and canning vegetables which helped feed the family. In later years she only had a small flower garden. She liked roses and her favorite was the yellow rose. She enjoyed watching the humming birds that would congregate at her feeder. Hazel enjoyed playing cards with family and friends and would win quite often. She also sewed and made a quilt for each of her children. Most of all she enjoyed having family and friends visit.

To order memorial trees or send flowers to the family in memory of Hazel Snell , please visit our flower store.
Send a Sympathy Card