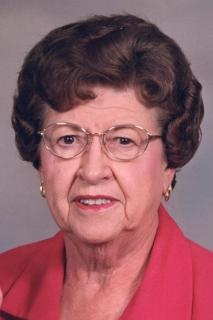 Mass of the Christian Burial: Will be held on Monday, May 9, 2016, at 10:30 a.m. at the St. John’s Catholic Church in Greenfield with burial in the Fontanelle Cemetery. Father Ken Gross will officiate the service. A luncheon will follow the burial at the church.

Family Visitation: The family will greet friends on Sunday from 3:00 p.m. to 5:00 p.m. at the Steen Funeral Home in Fontanelle.

Memorials: May be directed to the Helen Baudler memorial fund to be established by the family at a later date.

Helen Agnes Baudler was born August 7, 1924, the daughter of John Walter and Anna Pearl (Nelson) Lahey of the family farm north of Greenfield. She passed away on Wednesday, May 4, 2016, at the Good Samaritan Society in Fontanelle, Iowa, at the age of 91.

Helen was raised on the family farm north of Greenfield. She graduated from Greenfield High School. After graduation she worked for Musmaker Law in Greenfield, State Hygienic Laboratories in Iowa City and the Farmers Home Administration in Greenfield, Des Moines and Creston. She was united in marriage to Donald Baudler on February 26, 1949, in Greenfield, Iowa. To this union five children were born: Jim, Ron, Marilyn, Joan and David. Helen and Don farmed north of Fontanelle until they moved into Fontanelle in August of 1990.

Helen was an active member of the St. John’s Catholic Church, serving as Catechism teacher and president of the Altar Society. She liked to dance and play cards and most of all enjoyed all of her family.

She was preceded in death by her parents; husband, Donald in 2009; four brothers, Bernard, Leo, Jim and Jack Lahey; and three sisters, Ann Clow, Mary Rhodes and Kathy Funderburk.

To order memorial trees or send flowers to the family in memory of Helen Baudler , please visit our flower store.