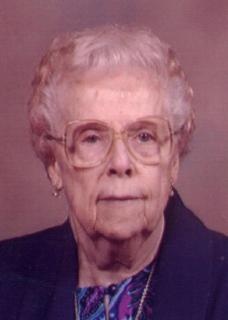 Funeral Services: Will be held on Monday, August 3, 2015, at 10:30 a.m. at the Emmanuel Lutheran Church in Fontanelle with burial in the Greenfield Cemetery. A luncheon will be held at the church following the burial. Pastor Steven Broers will officiate the service.

Family Visitation: Will be held on Sunday at the Emmanual Lutheran Church in Fontanelle from 3:00 p.m. to 5:00 p.m.

Memorials: In lieu of flowers memorials may be made to the Emmanuel Lutheran Church.

Helen Edna Hohertz was born Oct. 14, 1916 in Summerset Township, Adair County, Iowa to Henning and Edna (Spaulding) Jensen. She passed away on Tuesday, July 28, 2015, at the Greenfield Rehabilitation and Health Care Center at the age of 98.

Helen was baptized May 27, 1928 and confirmed April 20, 1930 at Emmanuel Lutheran Church, Fontanelle, Iowa. She grew up on a farm and attended rural school in Summerset Township.

On Feb. l6, l937 Helen was married to Elmer Hohertz at Emmanuel Lutheran Parsonage with Rev. A.J. Seegers conducting. To this union two children were born: Janet and Gene.

She was preceded in death by her husband Elmer in January 2000, her son Gene in August 2009, her daughter Janet in February 2012, her parents Henning and Edna Jensen, four brothers Rex, Clyde, Gilbert and Glen Jensen, four sisters, Elise Creighton, Alice Crabtree, Mable Pfundheller, Maye Hagler, and one grandson, Craig Lemke.

To order memorial trees or send flowers to the family in memory of Helen Hohertz , please visit our flower store.
Send a Sympathy Card