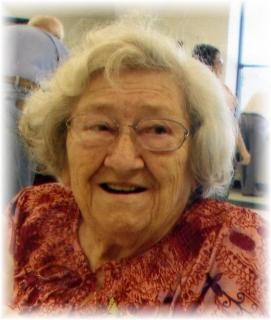 Funeral Services: Will be held on Saturday, February 1, 2014, at 10:30 a.m. at the Steen Funeral Home in Greenfield with burial in the Greenfield Cemetery. Mr. Phil Cannon will officiate the service. A luncheon will be held at the Greenfield Gospel Chapel following the committal services at the cemetery.

Open Visitation: Will be held on Friday, January 31st from 4 to 8 p.m. at the Steen Funeral Home in Greenfield.

Memorials: To the Helena Hahn memorial fund to be established by the family at a later date.

Helena was raised in Washington, D.C. and attended Anacostia High School. On May 7, 1953, she was united in marriage to Charley Hahn in Washington, D.C. To this union three children were born: Timothy, Thomas and Elaine. They lived in Oxon Hill, Maryland for 51 years before moving to Greenfield. She was employed by the D.C. Police Department Bureau of the Census and was a house wife.

Helena loved to cook, bake and read. She was a member of the Greenfield Gospel Chapel.

She was preceded in death by her parents; brothers, Karl, Peter, Theodore, Philip, James and John Pfaff; and sisters, Barbara, Anna, Magdalene and Ellen.

To order memorial trees or send flowers to the family in memory of Helena Hahn , please visit our flower store.