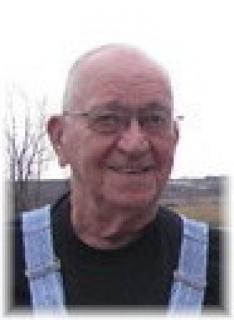 Funeral Services: Will be held on Thursday, April 30, 2015, at 10:30 a.m. at the Steen Funeral Home in Greenfield with burial at the Orient Cemetery. Pastor Jim Morris will officiate the service. Full Military Graveside Rites by Greenfield American Legion Head-Endres Post No. 265 and V.F.W. Post No. 5357. A luncheon will be held at the Orient United Methodist Church following the committal services at the cemetery.

Memorials: To the Howard Stoll memorial fund to be established by the family.

Howard was raised and educated in Chestnut, Illinois and moved to Dexter, Iowa, his freshman year and graduated from Dexter High School in 1950. On September 14, 1952, he was united in marriage to Jean R. Hodges in Des Moines, Iowa. To this union four children were born: Janel, Ed, Arnold and Norman.

Howard was a Korean War Veteran who served his country in the United States Army from 1953 to 1954 with one Bronze Service Star, National Defense Service Medal, United Nations Service Medal and Good Conduct Medal. He enjoyed playing cards and sports. He owned his own truck hauling livestock in the 50's then began farming until the mid 70's when he bought another truck to haul livestock out of Greenfield. In 1982 he started driving over the road for Werner Enterprises and later for Hawkeye Woodshavings. He retired from trucking and returned to farming around 2000. He was farming right up to his final days.

He was preceded in death by his parents; brother, Robert Stoll, Jr.; and sister, Evelyn Detert.

To order memorial trees or send flowers to the family in memory of Howard Stoll , please visit our flower store.
Send a Sympathy Card