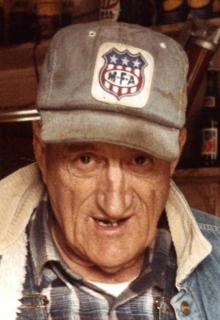 Funeral Services: Thursday, July 28, 2011 at 1:30 p.m. at the United Methodist Church in Bridgewater with burial in the Garner Cemetery, Bridgewater.

Family Visitation: Wednesday, July 27th, from 6 to 8 p.m. at the Steen Funeral Home in Fontanelle.

Memorials: To the Hugh McCall memorial fund to be established by the family.

Hugh Maxwell McCall was born January 31, 1921 to Ray Maxwell and Pearle Paulina (Thomsen) McCall at his parent's home in Washington Township. He passed away at his home in Bridgewater, Iowa at the age of 90.

Hugh was raised and educated in Washington Township, Adair County, Iowa. He graduated from Bridgewater High School in 1938. He served his country in the U.S. Air Force from 1942 to 1943.

On January 15, 1944 he was united in marriage to Dorothy Faye Woodside at the family home. To this union two children were born, J. C. and Cynthia. He lived on the family farm in Washington Township near Bridgewater, Iowa for many years until moving into his home in Bridgewater in 1980. The farm has been in the family for four generations.

Hugh was a farmer until retiring in 1980. He enjoyed farming and farm auctions and was always known as #500. He was a member of the Avondale United Methodist Church and the William Thompson Post No. 703 American Legion for more than 50 years.

He was preceded in death by his father, Ray McCall; mother, Pearle McCall and daughter-in-law, Marilyn McCall.

To order memorial trees or send flowers to the family in memory of Hugh McCall , please visit our flower store.