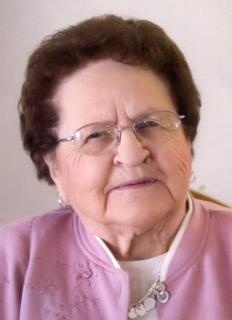 Celebration of Life Services: Will be held on Monday, January 30, 2017, at 10:30 a.m. at the Trinity Christian Church in Bridgewater with burial in the Victoria Township Cemetery, Rural Massena. Pastor David Clark will officiate the service. A luncheon will be held at the church immediately following the services.

Memorials: Memorials may be made to the Trinity Christian Church or to the Massena Fire Department.

Iada Jane McKee was born February 4, 1918, the daughter of Alva and Pearl (Morgan) Bissell in Cass County, Iowa. She passed away on Monday, January 23, 2017, at the Cass County Memorial Hospital in Atlantic, Iowa, at the age of 98.

Iada grew up and lived her entire life in the Massena area. On September 2, 1933, she was united in marriage to Rex McKee in Massena, Iowa. To this union five children were born: Nadine, Barbara, Karen, Jack and Jean. They farmed east of Massena. Iada was a member of the Trinity Christian Church in Bridgewater, serving on the ladies’ aide and she was a member of the Rose Garden Club.

To order memorial trees or send flowers to the family in memory of Iada McKee , please visit our flower store.