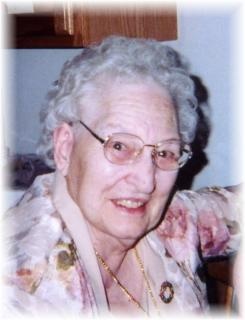 Graveside Services: Will be held on Saturday, May 18, 2013, at 11:00 a.m. at the Greenfield Cemetery in Greenfield, Iowa. Pastor Charles Layton will officiate the service. A luncheon will follow at the Greenfield United Methodist Church.

Opal Irene Mulhern, oldest daughter of Roy Wallace Crees and Christena Marie Jacobson was born April 14, 1915 and passed away May 12, 2013 in Wisconsin. She was 98 years old.

Irene was married on June 2, 1935 at Atlantic Methodist parsonage to H Glenn Mulhern. To this union was born 4 children, Shirley, Richard, Dallas, and Dorothy.

Irene was born on a farm in Prussia Township a mile east of Highland Church in Adair County, Iowa and lived 82 years in and around Greenfield, moving to Wisconsin in 1998. Irene was a member of the Greenfield Methodist Church.

Prior to her marriage Irene taught 2 years in rural schools in Grove #4 and Grove #1; after her 4 children were in school worked 10 years at Greenfield school as a cook; and then 10 years at Adair Co Memorial Hospital in the laundry and kitchen.

To order memorial trees or send flowers to the family in memory of Irene Mulhern , please visit our flower store.