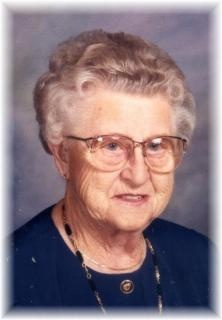 Family Visitation: The family will greet friends on Thursday evening from 6 to 8 p.m. at the Steen Funeral Home in Greenfield.

Memorials: To the Irma Bickford Memorial Fund to be established by the family.

Irma Kezia Bickford was born November 4, 1907, the daughter of William and Mary Elizabeth (Harrison) Schafroth in Mercer Township, Adams County, Iowa.  She passed away on Sunday, January 26, 2014, at her home in Greenfield, Iowa, at the age of 106.

Irma was raised in Adams County and graduated from Corning High School in 1922.  After high school she taught country school in Adams County.  On August 28, 1929, she was united in marriage to Paul Bickford at her family home in Corning, Iowa.  To this union two children were born: Edward and Priscilla.

Irma was an active member of the Greenfield United Methodist Church, Order of Eastern Star (75-year member), P.E.O. Chapter CA, and the State of Iowa Centenarians.  She enjoyed crocheting and sewing, made fantastic pies and cinnamon knots, but her great love was care of family and home. She spent hours working outside in her yard and gardens, as well as always having a “little project” (i.e.: cleaning the gutters) to keep her active and outside. Her home was regularly the gathering place for family and friends. In the early years of their marriage, she and Paul also boarded nieces and nephews so they could attend Greenfield High School. In 1967, when Priscilla returned to Greenfield with her 5 children, she and Paul were delighted to have their family close again.

Irma was preceded in death by her parents; her husband, Paul Bickford; her son, Edward Gordon Bickford; her daughter, Priscilla Bickford Chadduck; and siblings, Paul (Pete) Schafroth and Grace Menssen.

Irma’s family extends endless gratitude for all acts of kindness and support shown to Irma, in recent years, which enabled her to stay in her home; and also to them, in their time of sorrow. You are invited to celebrate her wonderful, full life at a luncheon at the church following the committal service at the cemetery.

To order memorial trees or send flowers to the family in memory of Irma Bickford , please visit our flower store.