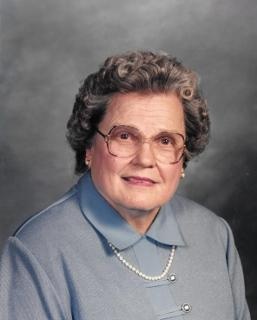 Funeral Services: Will be held on Tuesday, September 25, 2018, at 11:00 a.m. at the Immanuel Lutheran Church in Greenfield. The Steen Funeral Home in Greenfield is in charge of the professional arrangements.

Visitation: The family will greet friends on Monday at the Immanuel Lutheran Church in Greenfield from 4:30 p.m. to 8:00 p.m.

Memorials: To the Concordia Theological Seminary in Fort Wayne, Indiana.

Irma Ruth Queck was born February 28, 1928 in Des Moines, Iowa, the daughter of Rev. George and Clara (Kohn) Vogel. She passed away surrounded by family on September 20, 2018 at McAuley Terrace Independent Living, Johnston, IA at the age of 90.

Irma graduated Greenfield High School in 1946. On August 14, 1947, she was united in marriage to Ivan D. Queck at Immanuel Lutheran Church, Greenfield. Ivan and Irma took over operation of the family farm north of Greenfield in Prussia Township, where they raised eight children, seven boys and one girl.

After Ivan died July 22, 1997, Irma remained on the farm. In November 2016 she moved to McAuley Terrace Independent Living and lived there until her death.

Irma was a devoted member of Immanuel Lutheran Church, where she taught Sunday School, Wednesday School, and was active in the congregation’s Lutheran Women’s Missionary League (LWML).

She was preceded in death by her parents, her husband, and sisters Cordelia and Helen.

To order memorial trees or send flowers to the family in memory of Irma Queck , please visit our flower store.
Send a Sympathy Card