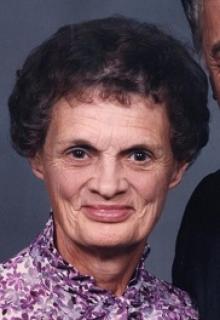 Celebration of Life Services: Will be held on Saturday, January 14, 2017, at 1:30 p.m. at the Frist Presbyterian Church in Greenfield with burial in the Greenfield Cemetery. Refreshments will be held at the church following the committal services at the cemetery. Pastor David Kincaide will officiate the service.

Open Visitation: Will be held on Friday, January 13th, from 2:00 p.m. to 7:00 p.m. at the First Presbyterian Church in Greenfield.

Family Visitation: The family will greet friends on Friday evening at the church from 5 to 7 p.m. at the First Presbyterian Church in Greenfield.

Memorials: Memorials may be directed to the Isabelle Heinbuch memorial fund to be established by the family at a later date.

Isabelle Clarene Bittner Heinbuch was born October 2, 1925 to William “Bill” Bittner and Wilhelmina “Minnie” Weber Bittner on October 2, 1925. She passed away January 10, 2017 at Greenfield Rehabilitation and Health Care Center in Greenfield, Iowa at the age of 91.

Isabelle attended country school until moving from the farm into town in 1936. She graduated in 1943 from Greenfield High School. Isabelle and her sister lived in Des Moines for two years where they worked for Look Magazine, she and all the Bittner girls stayed busy around the area where they were known for their painting and wall papering skills.

On November 2, 1947 Isabelle was married to Maynard Heinbuch. After their marriage they lived in Dubuque, Adel, Greenfield, Fontanelle and their farm south of Greenfield where she resided until she entered the care center in 2015. Maynard and Isabelle were married 67 years until his death in March of 2015.

Isabelle raised three children while also working at her and Maynard’s business Heiny’s T.V. & Furniture until retirement in 1994. Isabelle was always known for her hard work throughout her life whether it was working at their store, painting, papering, tending her large garden, mowing the yard or working on their farm alongside Maynard. She enjoyed her bowling team and going dancing in younger years. She was also the official “fish fryer” when her family would gather for supper every Sunday night. She needed little sleep, was always very healthy avoiding most all illness until her heart surgery at the age of 83.

Isabelle was a devoted mother, grandma and sister. Isabelle was baptized and confirmed in the Immanuel Lutheran Church in Greenfield and a member there until her marriage and joining the United Presbyterian Church where she was an active church member and the Sunday School secretary for many years. Maynard and Isabelle never missed a Sunday of church until later years when their health would sometimes prevent it. She was a member of the First Presbyterian Church in Greenfield and also the American Legion Auxiliary.

The family of Isabelle Heinbuch wishes to express heartfelt thanks to all for the many acts of kindness shown to them and invites you to join them for refreshments at the church after the committal service at the Greenfield Cemetery.

To order memorial trees or send flowers to the family in memory of Isabelle Heinbuch , please visit our flower store.
Send a Sympathy Card