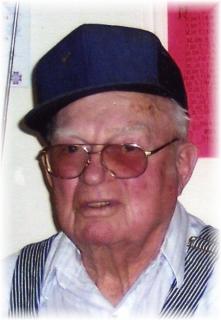 Ivan Chafa passed away on August 9, 2013, at the Good Samaritan Society in Fontanelle, Iowa.

In lieu of Visitation: There will be a Memorial Dance held at the Williamson Legion Hall on Sunday, August 25th from 2 to 5 p.m. Free admission and snacks will be served.

Memorials: To the Ivan Chafa memorial fund to be established by the family at a later date.

Ivan grew up in Fontanelle and graduated from Fontanelle High School. On October 29, 1938, he was united in marriage to Thelma Pickrell in Fontanelle, Iowa. To this union two children were born: Delano and Valinda.

He served his country in the United States Navy after Pearl Harbor. After the war he worked construction in Iceland and Trinidad for a few years. When he returned to the United States worked for Schilberg Construction. Ivan enjoyed dancing, camping, traveling, fishing and visiting with friends and family.

He was preceded in death by his parents; wife, Thelma Chafa; son, Delano Chafa and sister, Lena Wyllie.

To order memorial trees or send flowers to the family in memory of Ivan Chafa , please visit our flower store.
Send a Sympathy Card