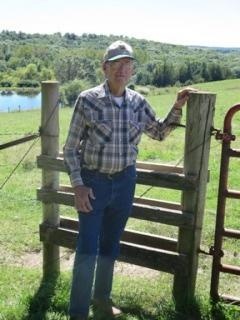 Memorials: Memorials may be directed to the Ivan L. Miller Memorial Fund to be established by the family.

Ivan Lee Miller died peacefully at the Good Samaritan Center in Fontanelle on June 5, 2020. Ivan was born on December 26, 1931 at his family farm in Prussia Township to Virnen Ray and Edna Pauline (Armstrong) Miller. He was baptized on May 13, 1934 by Rev. B. W. McEldowney at Methodist Episcopal (Highland) Church where his family attended. He attended rural school at Prussia #4 (Highland) and #5 (2 miles east of Highland), and fondly remembered his teachers Maud Handley, Mildred Sears, and for grades 5-8, his own mother, Country School Teacher Edna Miller.

Ivan graduated from Fontanelle High School in 1950 having served as vice president of his class and participated in track, school plays, and choir. Known for being an outdoorsmen, his class prophecy read, “Ivan Miller (Cobb) operates his own sporting resort in New York state. This resort includes skiing, fishing, and hunting.” In July 1950 he accompanied Kay Dodds, a close friend and classmate, to Ontario, Canada, along with Kay’s parents. They enjoyed fishing, camping, and seeing wildlife. Postcards that he sent to his sweetheart, Ethelmarie Martin, stated they were ‘having a swell time’. His love of fishing and water was bequeathed to a fellow classmate in the Class Will.

On April 15, 1951, Ivan and Ethelmarie were married at Emmanuel Lutheran Church in Fontanelle by Pastor Paul C. Lutz. The couple lived their entire married life in the Fontanelle area where they raised six children: twins Deneise and Dennis, Diane, Deborah, and twins Douglas and David. In 1978, Ivan and Ethelmarie moved to Whoopy Hollow, 100 acres of wooded land west of Fontanelle. As a youth, Ivan had spent many summers at Whoopy caring for the family’s sheep. This beloved land continues to host annual family gatherings and deer hunting adventures. Ivan loved camping and all outdoor life. The family camped on weekends around Iowa, and took yearly vacations to Colorado, Canada, and surrounding states.

Following high school graduation, Ivan worked with his father at the Standard Oil Station in Fontanelle. Later he worked construction for Charlie Cummins. In 1956, Ivan and Ethelmarie opened Miller Produce where they purchased farmers’ cream, poultry, and eggs, and sold ice cream and animal feed. Ivan later worked bridge construction when I-80 was being built, and then at Schildberg’s Construction until his retirement in 1983. In earlier years, Ivan enjoyed being a Scoutmaster to Fontanelle Boy Scouts and as a volunteer fireman with the Fontanelle Fire Dept. & Rescue Squad. In his retirement years, he enjoyed woodworking, fishing, hunting, and flying his ultralight plane. At age 85, he nearly single-handedly built a bridge over a creek, an oft-traveled spot at Whoopy.

To order memorial trees or send flowers to the family in memory of Ivan Miller , please visit our flower store.