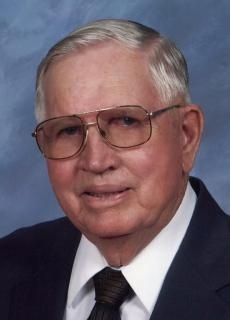 Funeral Services: Will be held on Wednesday, May 25, 2016, at 10:30 a.m. at the United Methodist Church in Greenfield with burial at the Greenfield Cemetery. Full Military Graveside Rites will be conducted by the Greenfield American Legion Head-Endres Post No. 265 and V.F.W. Post No. 5357. A luncheon will be held at the church following the committal services at the cemetery. Pastor Eric Schubert will officiate the service.

Family Visitation: The family will greet friends on Tuesday evening from 6:00 to 8:00 p.m. at the Steen Funeral Home in Greenfield.

Memorials: Memorials may be directed to the Jack Kinyon memorial fund to be established by the family at a later date.

Jack Leo Kinyon was born June 3, 1920 in Redondo Beach, California to Walter L. and Arilda (Young) Kinyon. He passed away Monday, May 16, 2016 at the Greenfield Rehabilitation and Care Center at the age of 95.

Jack was raised in rural Adair County and graduated from Greenfield High School. Following high school, he attended Iowa State University. Jack served in the U.S. Navy aboard the USS New Mexico from 1942 to 1945 during World War II. He participated in 15 battles in the Pacific and the occupation of Japan. Jack received the Navy Commendation Medal.

On December 8, 1945, Jack was united in marriage to Leita Florence Frank. To this union three children were born: Lawrence, Kathleen, and Barbara. The family lived and farmed near Bridgewater. In 1987 Jack and Leita moved to Greenfield. They had been married 59 years when Leita passed away in 2005. Following Leita’s death Jack moved to the Homestead Co-op. Jack enjoyed playing cards, woodworking projects, gardening, and caring for his roses. Jack was a member of the Greenfield United Methodist Church, Legion Post 703 in Bridgewater for 71 years, and VFW in Greenfield. He was a life member in the USS New Mexico Association and was a 63 year member of Farm Bureau.

Jack was preceded in death by his parents, wife Leita, brothers Wayne and Rex, and sister Velda Hovendick.

To order memorial trees or send flowers to the family in memory of Jack Kinyon , please visit our flower store.