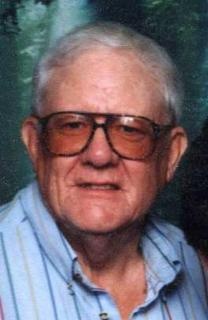 Services: Thursday, January 6, 2011, at the Greenfield United Methodist Church at 1:00 p.m. with Pastor Charles Layton officiating.   Private family interment will be held at the Rose Hill Cemetery in Menlo, Iowa.  Full military graveside rites will be conducted by the Greenfield American Legion Head-Endres Post No. 265 and V.F.W. Post No. 5357.

James graduated from Center Point High School in 1950.  He then went on and graduated from Iowa State University in 1955 with a Bachelor of Science Degree.  He served his country in the United States Army.  On July 31, 1955, he was united in marriage to Ruth Wantz in the First Christian Church in Ames, Iowa.  To this union two children were born: Cynthia Lee and Randy.

James had worked for Hinky Dinky and Hy-Vee Grocery Stores.  He had lived in Marshalltown, Ames, Des Moines, Menlo, and for the last three and a half years in Greenfield.  He enjoyed fishing, watching movies, music (Glenn Miller, Benny Goodman, and Chet Atkins), and old cars.

To order memorial trees or send flowers to the family in memory of James Haley , please visit our flower store.