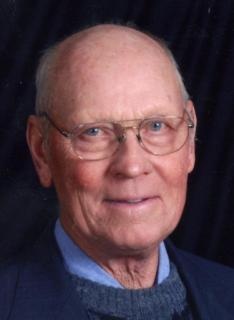 Mass of Christian Burial: Will be held on Saturday, April 30, 2016, at 10:30 a.m. at the St. John’s Catholic Church in Greenfield with a private family burial in the Greenfield Cemetery. Father Ken Gross will officiate the service. A luncheon will immediately follow the mass.

Family Visitation: The family will greet friends on Friday from 6 to 8 p.m. at the St. John’s Catholic Church.

Prayer Service: Will be held on Friday evening at 7:00 p.m. at the St. John’s Catholic Church.

Memorials: In lieu of flowers to the James Meisenheimer memorial fund to be established by the family.

James William Meisenheimer was born January 1, 1940 to Frederick W & Agnes (Miller) Meisenheimer at their farm in Summerset Township in Adair County, Iowa. He was baptized and confirmed at St John's Catholic Church in Greenfield, Iowa. He graduated from Greenfield High School in 1958. On February 7, 1960 he was united in marriage to Shirley Weinheimer. They moved to a farm in Summerset Township. In 1973 they moved to their current location, which is the farm where James was born and raised. Six children were born to this union; Nick William, Tamera Ann, Pamela Kaye, Mark Edward, Fred W & Jerry J.

James served on the Greenfield Community School Board, Farmers Cooperative Board in Greenfield and Farmers Lumber Board in Fontanelle.

He was a farmer all his life. James' great pride in the farm and the love of the land was second only to the love of his family.

James and Shirley were fortunate enough to take their children on lots of family vacations along with Alaska, Hawaii, and Europe on their own.

He was preceded in death by a son Mark, his parents, parents-in-law, brother Leo, four brothers-in-law, two sisters-in-law, and a nephew.

To order memorial trees or send flowers to the family in memory of James Meisenheimer , please visit our flower store.