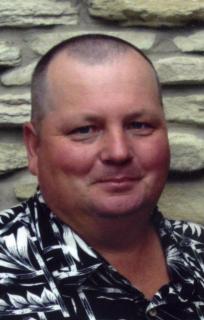 Celebration of Life Services: Will be held on Tuesday, September 22, 2015, at 11:00 a.m. at the United Methodist Church in Greenfield with burial at the Greenfield Cemetery at a later date. A luncheon will be held at the church immediately following the services. Pastor Eric Schubert will officiate the service.

Family Visitation: The family will greet friends on Monday evening from 5 to 7 p.m. at the Greenfield United Methodist Church.

Memorials: To the James Mitchell memorial fund to be established by the family at a later date or https://www.gofundme.com/gy4p62qn.

James grew up and lived his entire life in the Greenfield area. He graduated from Greenfield High School in 1979. On August 18, 1984, he was united in marriage to Denna Hager in Greenfield, Iowa. To this union four daughters were born: Amanda, Brittany, Crista and Kaitlyn. He owned and operated Redman Construction in Greenfield for over thirty years. He loved hanging out with his family, collecting pedal tractors, attending basketball games, county fair, watching old westerns and Law & Order, farming, working dirt and was an ISU fan.

He was preceded in death by his father, Marion Mitchell; father-in-law, Lloyd Hager; and brother-in-law, Dennis Jess.

To order memorial trees or send flowers to the family in memory of James Mitchell , please visit our flower store.
Send a Sympathy Card