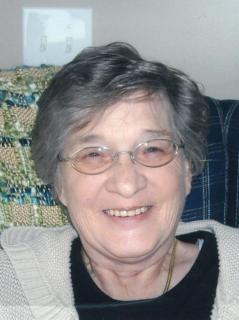 Celebration of Life Services: Will be held on Saturday, January 5, 2019, at 11:00 a.m. at the Steen Funeral Home in Massena with burial in the Victoria Township Cemetery at a later date. A luncheon will be held at the St. Patrick’s Catholic Church in Massena immediately following the service at the funeral home.

Family Visitation: Will be held at the luncheon immediately following the service.

Memorials: Memorials may be directed to the Janet Rutledge memorial fund to be established by the family at a later date.

Janet Kay Holste Rutledge passed away Wednesday, December 19, 2018 at her home. She was born October 17, 1939 in Massena, Iowa, the daughter of Fred and Belle Symonds Holste. She attended elementary school at the country school near Massena, and graduated in 1956 from Massena High School. She married John Rutledge, Sr. in 1956.

Janet loved spending time with all of her family, and read books voraciously. Quilting was one of her skills, put to use by creating Christmas stockings for all of her family members. She enjoyed gardening, primarily for flowers, coming inside to watch Jeopardy! and The Golden Girls. Antiques were another passion, decorating in grey graniteware and duck decoys. A skill she particularly enjoyed exercising was speaking her mind on most any subject.

She was a CNA for many years, working at a Nursing Facility in Fontanelle and the Cass County Hospital in Atlantic, Iowa. She retired from nursing, and moved to Ankeny in 2003 to be closer to her family.

She is survived by her six children: David (wife Karen) of Estherville, Iowa; Dale (wife Chris) of Lisbon, Iowa; Don of Aptos, California; Denise (husband Michael Woolsey) of Ankeny, Iowa; Dianne (husband Bernie Roberts) of Corning, Iowa; and John Jr. (wife Kay) of Kansas City, Missouri. She is also survived by her sister Kathy (husband Doug Denham) of Ankeny, Iowa, and her sister-in-law Jean (husband Kenny Young). There are 17 grandchildren, 17 great-grandchildren, and a host of nieces, nephews, friends, and neighbors.

She was preceded in death by her parents, brother Charles, sister Connie Lally, husband John Sr., and great-niece Brooke Holste.

To order memorial trees or send flowers to the family in memory of Janet Rutledge , please visit our flower store.
Send a Sympathy Card