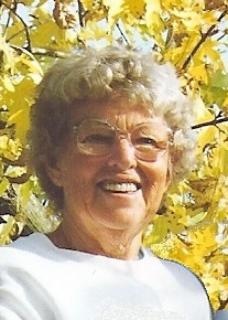 Funeral Services: Will be held on Thursday, January 7, 2021, at 11:00 a.m. at the Massena Baptist Church with burial following in the Massena Center Cemetery. A luncheon will be held at the church following the committal services at the cemetery. Pastor Josh Heisterkamp will officiate the service.

Family Visitation: The family will greet friends on Wednesday evening from 6:00 p.m. to 8:00 p.m. at the Steen Funeral Home in Massena.

Memorials: Memorials may be made to the Janet Schwenke memorial fund to be established by the family.

Janet Ann Schwenke was born June 29, 1933, the daughter of Harvey A. and Lillie M. (Dau) Jones in rural McClelland, Iowa. She passed away on Friday, January 1, 2021, at the University of Nebraska Medical Center in Omaha at the age of 87.

Janet was raised in Council Bluffs through grade school until the family moved to Walnut where she graduated from high school in 1944. Janet attended Westmar College for one year where she was enrolled in elementary teaching. On February 5, 1956, she was united in marriage to Leroy Arthur Schwenke in the Calvery Baptist Church in Walnut, Iowa. To this union, six children were born: Leanne, Susan, Jeff, Janalee, Bruce, and Trisha.

Janet worked at First National Bank in Omaha, Nebraska. She became a wife and homemaker until a brief stint in 1962 when she returned to First National Bank. The family farmed on the farm northeast of Massena until 1966 when they moved into town. Again a brief stint took Janet and the kids to be with Leroy one summer vacation that turned into a whole summer when he worked on the gas pipeline. A trip north to Minnesota wound up taking the family to Indiana through major population areas that Janet wouldn’t come back through without Leroy being close by. The family lived in Wisconsin before coming home. A small camper was purchased to live in to finish out the long summer. Later the camper for many years became a great base for Janet on the many camping weekends with the Schwenke clan. Even with all the work in getting the family to the campgrounds and shuffling kids home to walk their paper routes, Janet enjoyed this time of family camaraderie.

Before her own children were old enough to be on their own, Janet started babysitting. This brought a continuous stream of local children through her home for many years. Wherever Janet went, children would find their way to her lap or nuzzle up close to read a book, play a game, or just be cuddled whenever comfort was needed.

Janet was a member of the Massena Baptist Church, neighborhood Sunshine Club, was a Boy Scout Assistant Den Leader, and AWANA Leader.

To order memorial trees or send flowers to the family in memory of Janet Schwenke , please visit our flower store.
Send a Sympathy Card