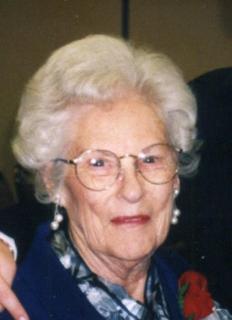 Funeral Services: Will be held on Thursday, November 9, 2017, at 11:00 a.m. at the United Methodist Church in Greenfield with burial in the Greenfield Cemetery. A luncheon will be held following the committal services at the church. Pastor Eric Schubert will officiate the service.

Family Visitation: The family will greet friends on Thursday at the church one hour prior to services.

Memorials: To the Jean Lambi memorial fund to be established by the family at a later date.

Jean Lois Van Dyke Lambi daughter of Lambert and Jennie Van Dyke was born April 25, 1918 on a farm north of Greenfield, Iowa. She passed away on November 4, 2017 at Greenfield Rehabilitation and Health Care Center, at the age of 99.

On February 28, 1938, she was united in marriage to Harold Lambi at her parents’ home in Lee Township north of Greenfield. Three children were born to this union: Leila Jane (who passed away at birth), Leo Duane and Ted Leroy. Harold passed away Dec. 25, 1984 after a lengthy illness.

Jean was a homemaker and worked in school food service and retail. Her hobbies included quilt making and gardening. Jean was a lifelong member of the United Methodist Church. She was involved in the UMW, Sunday School and many other church activities. She was a loving grandmother to her six grandchildren and seven great grandchildren.

To order memorial trees or send flowers to the family in memory of Jean Lambi , please visit our flower store.
Send a Sympathy Card