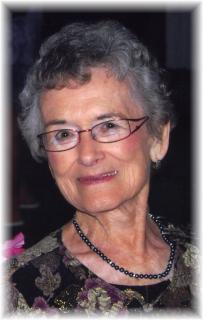 Funeral Services: Will be held on Thursday, April 18, 2013, at 11:00 a.m. at the United Methodist Church in Bridgewater with burial in the Garner Cemetery, south of Bridgewater.

Visitation: Will be held on Wednesday, April 17th from 1 p.m. to 8 p.m. at the Steen Funeral Home in Fontanelle with the family greeting friends from 6 to 8 p.m.

Memorials: Memorials may be made to the Jeane Lowry memorial fund to be established by the family.

Mrs. Jeane L (Adrian) Lowry was born on January 23, 1923 in Adams County to Edna (Tucker) and Merlyn W Adrian.  She passed away peacefully on Sunday, April 14, 2013, at the home of her son, Les and his wife Linda Sulgrove in Des Moines, Iowa.   Her husband, Kenneth Anderson of Bonita, California, was by her side.

Jeane grew up in Adams and Madison County until her sophomore year, when she moved to Creston.  She graduated from Creston High School in 1941.  After high school, Jeane married Merlyn Sulgrove on June 15, 1941.  While he was in the service, she worked at a registration center for the draft board and later worked as a telephone operator in Des Moines. Upon Merlyn’s discharge from the service, they settled in Bridgewater where she worked along side Merlyn at the family business, Sulgrove Hardware.  Later, they sold the business and operated M Sulgrove Company, a John Deere Implement Dealership until Merlyn’s death in 1971.  During this time, they adopted 2 sons, Lonnie Dale Sulgrove and Leslie Lynn Sulgrove. After Merlyn passed away, Jeane worked at Dwyer Hardware until her retirement.  In 1977, Jeane married Emmett Lowry. Sadly he passed away a short time later.  In 1979, Jeane brought her mother Edna home to care for her until she passed away. On June 14, 1994, Jeane married a high school classmate Kenneth Anderson and moved to Bonita, CA. They spent their summers in Bridgewater.  Last year, when her health began to fail, she moved back to Iowa with her son Les and his family where she remained until her death on April 14th.  Jeane suffered from congestive heart failure and her last month and a half was spent in home hospice. Jeane was a member of the Legion Auxiliary and United Methodist Church in Bridgewater.  She quilted and sewed many projects for the grandkids and Church Bazaars and enjoyed gardening.  She was a competitive card player and taught all the grandchildren to play many card games.  Jeane enjoyed bringing many of her friends to Des Moines for “Chinese dinners” prepared by her son, Les.

The family would like to extend a special thank you to Senior Helpers caregiver Lacey Christensen and Mercy Hospice nurse Jenny Lohner for their care and support to Jeane and her family during her final time in Iowa.

To order memorial trees or send flowers to the family in memory of Jeane Lowry , please visit our flower store.
Send a Sympathy Card