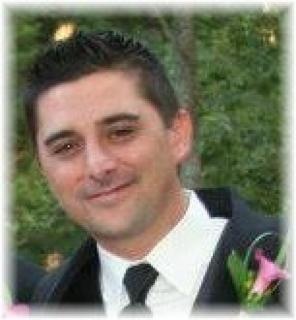 Celebration of Life Services: Will be held on Thursday, December 4, 2014, at 2:00 p.m. at the Avondale United Methodist Church, rural Fontanelle. Pastor Laural Westerkamp will officiate the service. In lieu of flowers a memorial fund has been set up for his children’s college fund at the First National Bank in Fontanelle. A luncheon will be held at the church immediately following the service.

Memorials: In lieu of flowers a memorial fund has been set up for his children’s college fund at the First National Bank in Fontanelle.

Jeremy John Brewer was born on August 19, 1978, to Steve and Sheri (Fagan) Brewer in Mission Viejo, California. He passed away on November 27, 2014 at the Kavanaugh House in Des Moines, Iowa, at the age of 36.

He spent his childhood in Oklahoma. He attended elementary school in Enid and graduated from Enid High School in 1996. Following graduation he joined the U.S. Air Force before following his calling in sales. On December 12, 1998 he was united in marriage to the love of his life, Kimberly Steward in Enid, Oklahoma. To this union two children were born: Shelby and Ellie. The early part of their married life was spent moving around the country as Jeremy pursued new sales opportunities taking them to Salt Lake City, Utah and Denver, Colorado before making their home in Enid, Oklahoma for several years before moving to Fontanelle, Iowa for the past two years. Jeremy was a natural salesman and enjoyed the rush of persuading people and closing the deal.

Jeremy enjoyed golfing, watching movies and sports, riding the four wheeler, fishing, playing poker and telling stories. Jeremy epitomized living life to the fullest. He thrived on being the center of attention and was always looking for a reason to get together with friends and have a good time. He had a great sense of humor and was always looking for the next adventure and adrenaline rush. He loved spending time with his family, his beloved dog Boomhower and his extremely tight circle of friends who he considered family.

To order memorial trees or send flowers to the family in memory of Jeremy Brewer , please visit our flower store.