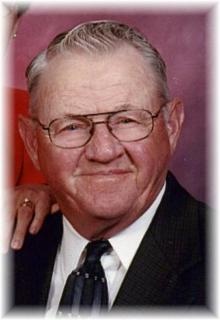 Jerry Goetz passed away on Wednesday, May 23, 2012, at the Adair County Memorial Hospital in Greenfield.

Gerald “Jerry” David Goetz was born on July 18, 1933, the son of Edgar and Ella (Heuckendorf) Goetz in Adair County, Iowa. He passed away on Wednesday, May 23, 2012, at the Adair County Memorial Hospital in Greenfield at the age of 78.

Jerry was raised and educated in the Orient area. He graduated from Orient High School in 1952. He served his country in the United States Army. On April 24, 1965, he was united in marriage to Frances Parman in the home of Mr. and Mrs. Edgar Goetz in Orient, Iowa. To this union one daughter, Shelly, was born. They lived in the Orient area until 1972, when they moved to Red Oak. Jerry was an equipment operator for the Natural Gas Pipeline. In 1987, he retired and they moved back to Orient, where they built the log cabin home.

He is survived by his wife, Fran Goetz of Orient; daughter, Shelly Goetz of Glenwood, Iowa; other relatives and many friends.

To order memorial trees or send flowers to the family in memory of Jerry Goetz , please visit our flower store.