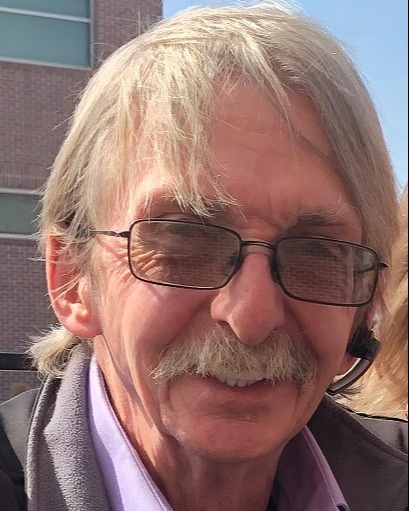 Mass of Christian Burial: Will be held on Saturday, October 15, 2022, at 2:00 p.m. at the St. Timothy’s Catholic Church Reno south of Cumberland with burial in the St. Timothy’s Catholic Cemetery.  You're welcome to wear a Hawaiian shirt to celebrate Jerry’s life at the service.  Father Phillip Bempong will officiate the service.  Online condolences may be left to the family at www.lambfuneralhomes.com.  The Lamb Home of Massena is in charge of professional arrangements.

Memorials:  Memorials may be made to the Jerry McCurdy memorial fund to be established by the family at a later date.

Jerry Dean McCurdy was born in Greenfield, IA June 10, 1960, a day of birth he would later pretend to hate sharing with his daughter. He was the third child born to Calvin and Wilma McCurdy, and brother to Linda, Mike and Karen. Growing up Jerry loved to fish, hunt, drum and later drive very fast cars…only some of which ended up in the ditch. He wrestled in high school, a skill he continued to bring to kids and grandkids at almost every family event.
Before settling down he traveled across the country in an old school bus following the music as a drummer in the band Atlanta. Then he was with his sister Linda, brother-in-law Don and close friend Boz in Willow Creek. He continued his music career with his final band Hard Up, lugging around a double caged pearl case drum set wherever he went. His life was…pun intended…a crazy train.
Along his travels he became a dad to Kristen and Calie, and decided to stay in Iowa to farm and live the family life. Putting worms on hooks and watching bobbers going up and down became a family habit he later passed on to his grandkids.
He married his wife Deb Swope in 2003, spending 18 beautiful years building a life together. Farming was his passion, and he was damn good at it. Jerry was a comedian and storyteller never missing the opportunity to share how big the fish was, how fast he was going in that truck or how the crop was that season.
Jerry loved and appreciated the people in his life, and as his family we appreciate you the same for celebrating his life with us today.
He was preceded in death by his parents; wife, Deb McCurdy; and nephew Dustin McCurdy.
He is survived by his children, Kristen McCurdy and Partner Eric, Calie Freestone and husband Kevin, Krystal Kolthoff and husband Kyle, Brad Penton and wife Dawn and Curt Penton; his siblings, Linda Reineke and husband Don, Michael McCurdy and wife Sandy and Karen Bower and husband Kevin; many nieces, nephews, grandchildren, great grandchildren and amazing friends.
Roughie, Roughie, Tally-ho.

To order memorial trees or send flowers to the family in memory of Jerry McCurdy, 62, of Cumberland, please visit our flower store.

Burial will follow the Mass at the St. Timothy's Catholic Cemetery. Refreshments will be held at the church following the committal services.