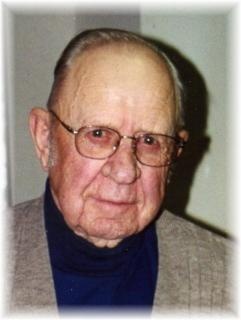 Funeral Services: Will be held on Thursday, June 5, 2014, at 10:30 a.m. at the United Methodist Church in Greenfield with burial at the Greenfield Cemetery. A luncheon will be held following the committal services at the church. Pastor Eric Schubert will officiate the service.

Family Visitation: The family will greet friends on Wednesday evening from 6 to 8 p.m. at the Steen Funeral Home in Greenfield.

Memorials: To the Jesse Leeper memorial fund to be established by the family at a later date.

Jesse Samuel Leeper was born December 19, 1916, in Pacific Junction, Iowa, the son of Middy Harrison and Bessie Jane (McNary) Leeper. He passed away on Saturday, May 31, 2014, at the Adair County Memorial Hospital in Greenfield at the age of 97.

Jesse grew up in Adair and Madison Counties. On December 17, 1938, he was united in marriage to Bonnie “Evelyn” Bates in Omaha, Nebraska. They lived in Greenfield where Jesse worked for Schildberg Construction, retiring in 1981. After retiring he loved to travel, camp and fish. He was on a bowling league for 30 years. He really enjoyed watching Iowa sport teams, especially the Iowa Hawkeyes. He enjoyed having his family around. Jesse was a member of the United Methodist Church and The Odd Fellows.

He was preceded in death by his parents; wife, Evelyn in 2003; sisters, Bernice Bitcon, Verna Glaspell and Ruth Hohman.

To order memorial trees or send flowers to the family in memory of Jesse Leeper , please visit our flower store.