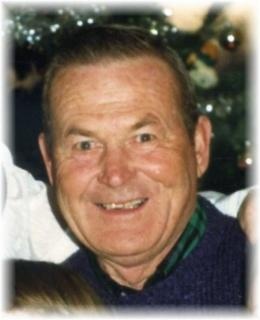 Open Visitation: Will be held on Thursday, Jan. 8th from 3 p.m. to 8 p.m. at the Steen Funeral Home in Massena.

Family Visitation: The family will greet friends on Thursday evening from 6 to 8 p.m. at the Steen Funeral Home in Massena.

Memorials: To the St. Timothy’s Catholic Church or to the Cumberland Fire Department.

James Russell Daugherty was born September 12, 1930, to Charles and Sarah (Clinton) Daugherty in Cumberland, Iowa. He passed away on Friday, January 2, 2015, at his daughter's home in Omaha, Nebraska, at the age of 84.

Jim was a lifelong resident of Cumberland. On December 23, 1950, he was united in marriage to Wilma Ballentine. To this union two daughters were born: Jackie and Teresa. He was drafted into the United States Army in February of 1952. He went to Fort Smith, Arkansas to Camp Chaffee for six months and them to Augsburg, Germany for 18 months. He worked artillery and returned in January of 1954.

Jim worked construction and for the Cumberland Co-op before he started his career as a service man for Peoples Natural Gas in Cumberland, Massena and Anita, retiring in 1993. He enjoyed his fishing trips to Minnesota.

He was preceded in death by his parents; wife, Wilma in 2006; two sisters, Regina Johnson and Margaret Brixius; and two brothers, Dudley and Tom Daugherty.

He is survived by his two daughters, Jackie McLaren and husband Joe and Teresa Christensen and husband Gail all of Omaha; five grandchildren, Bridget, Brianna and Tim McLaren and Molly and Sam Christensen; brother, Pat Daugherty and wife JoAnn of Aurora, Colorado; other relatives and friends.

To order memorial trees or send flowers to the family in memory of Jim Daugherty , please visit our flower store.