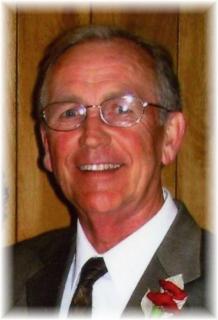 Open Visitation: Will be held on Friday, August 15th, from 3 p.m. to 8 p.m. at the St. Patrick’s Catholic Church in Massena.

Family Visitation: The family will greet friends on Friday evening from 6 to 8 p.m. at the St. Patrick’s Catholic Church.

Scripture Service: A scripture/prayer service will also be held on Friday at 5:30 p.m. at the St. Patrick’s Catholic Church.

Memorials: To the Jim Stakey memorial fund to be established by the family at a later date.

Leo James Stakey passed away at his home on August 12, 2014, surrounded by his loving family, as he was his entire life.

“Jim” was born on September 14, 1945, to Helen (Neiens) and Leo Stakey. He was one of over 200 babies born at the Bristow Hotel in Massena in the late 40’s and early 50’s. At the age of six, he was affected by polio. Jim grew up helping his family run Stakey Dairy and, along with his sisters, delivered many, many bottles of milk in Massena. He attended C & M High School, graduating in 1963. After high school, Jim attended Southwestern Iowa Community College in Creston, and was a member of the Army Reserves from 1966 until 1972.

In the early years, Jim was employed by Fullerton Lumber Yard in both Massena and Baxter, was self-employed erecting steel and wood frame farm buildings, and did general carpentry work. Jim retired in 2008 after serving thirty years as a substitute and full-time rural mail carrier for the U.S. Postal Service; it was important to him to provide the best service he could to his customers.

Jim was a lifetime member of St. Patrick’s Catholic Church, serving his first mass when he was four years old. He was a member of the Massena Lions Club, American Legion Post #693, the Massena Chamber of Commerce, and he served on the Massena City Council.

Outdoor activities were a large part of Jim’s life; he enjoyed golfing, fishing, hunting, camping, and going to the horseraces with family and friends. Jim was an avid Yankee fan all his life, and when it comes to music, his close friends and family know that Elvis was “King”. Jim was very proud of his grandchildren and rarely missed their activities, whether a sporting event or a dance recital. After retirement, Jim and Phyllis enjoyed traveling and spending more time together.

Despite Jim’s health struggles during the past few years, he will always be remembered for his soft-spoken manner, his willingness to help a friend, his kindness and compassion, and his sense of humor.

To order memorial trees or send flowers to the family in memory of Jim Stakey , please visit our flower store.
Send a Sympathy Card