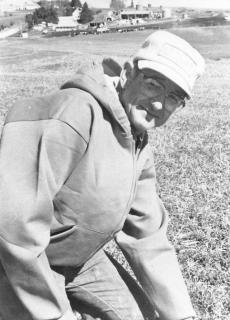 Public Graveside Services: Will be held on Saturday, February 27, 2021, at 3:00 p.m. at the Fontanelle Cemetery, Fontanelle, Iowa. Pastor Cathy Nutting will officiate the service. The Steen Funeral Home in Greenfield is in charge of the professional arrangements.

Memorials: Memorials may be directed to the Adair Casey Conservation Club as Jimmie's favorite outing was to attend the annual fundraiser event the last Saturday of February each year.

Jimmie Dale Miller was born June 20, 1937, on the family farm north of Fontanelle, Iowa, the son of Virnen and Edna (Armstrong) Miller. He passed away on Sunday, February 21, 2021, at the Good Samaritan Society in Fontanelle, Iowa, at the age of 83.

Jimmie was raised on the family farm north of Fontanelle and attended Prussia #5 country school where one of his teachers was his mom. When he was 15, he moved back to the family farm with his Uncle Irvin Miller and they began farming together. On February 6, 1959, he was united in marriage to Shirley Arlene Dunn in the Fontanelle United Methodist Church. To this union four children were born: Mark, Lori, Lisa and Mike.

They farmed north of Fontanelle until they moved into Greenfield in 2018. Jimmie was a dairy farmer and did agriculture associated work, construction and manufacturing jobs. He enjoyed hunting, fishing, was always willing to teach others about the outdoors and especially loved talking about his grandkids. Every picture he carried in his wallet had one of the grandkids in it. Whenever he would see one of them, he would always ask "You got any hugs you ain't usin'?". He never knew a stranger – would go up to anyone and visit. He inherited his mother’s sense of humor and usually had a quick comeback. He always had a story to tell and was always willing to share how he had cheated death when he was shot in a hunting accident at age 16 and carried a bullet in one lung as a souvenir the rest of his life.

He was preceded in death by his parents, his Uncle Irvin Miller and two brothers, Delmar and Ivan Miller.

To order memorial trees or send flowers to the family in memory of Jimmie Miller , please visit our flower store.