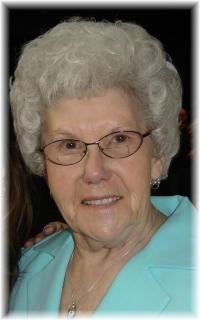 Funeral Services: Thursday, December 22, 2011, at 1:30 p.m. at the Greenfield United Methodist Church with burial in the Fontanelle Cemetery.

Memorials: To the Joan Baier Memorial Fund to be established by the family.

Joan Elaine Baier was born December 13, 1924 to Carl Henry and Bessie I. (Bolton) Jensen in Eureka Township, Adair County, Iowa. She passed away December 19, 2011 at the Greenfield Manor in Greenfield, Iowa at the age of 87.

Joan grew up on a rural farm near Fontanelle and graduated from Fontanelle High School in 1943. On February 17, 1948 she was united in marriage to Delmer Henry Baier. They lived on the North place near Fontanelle and then west of Greenfield. To this union three sons were born: Wes, Rick and Tim.

Joan was a teacher and took teachers training in high school and taught at Prussia No. 2. She also was a sales clerk for her husband's auction service and a homemaker.

Joan enjoyed traveling, gardening, playing Bingo, working at the Adair County Fair stand and helping her church give out cookies at the Interstate rest area, visiting her grandchildren and spending time with her special friend Ardith Christofferson. She attended and supported her children and grandchildren at many sporting events, wrestling, baseball, track, cross country, football, soccer and dance.

Joan was a member of the Highland United Methodist Church and served as the church treasurer for many years, Lions Club, Optimist Club, VFW Auxiliary, a cub scout leader, and a Bible school teacher.

She was preceded in death by her husband, Delmer Baier; parents, Carl and Bessie Jensen; mother and father-in-law, Henry and Rose Baier; sister-in-law, Sophie Jensen and a sister, Betty Matthews.

To order memorial trees or send flowers to the family in memory of Joan Baier , please visit our flower store.
Send a Sympathy Card