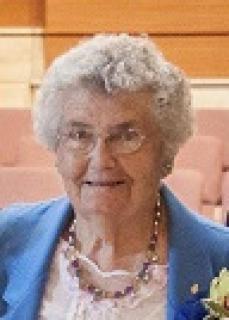 Funeral Services: Will be held on Thursday, April 26, 2018, at 10:00 a.m. at the Steen Funeral Home in Fontanelle with burial in the Mt. Zion Cemetery, Rural Prescott, Iowa. A luncheon will be held at the Avondale United Methodist Church following the committal services at the cemetery. Pastor Cathy Nutting will officiate the service.

Family Visitation: The family will greet friends on Wednesday evening, from 6:00 p.m. to 8:00 p.m. at the Steen Funeral Home in Fontanelle.

Memorials: Memorials may be directed to the Joan David memorial fund to be established by the family at a later date.

Nellie Joan David was born March 1, 1932, near Orient, Iowa, the daughter of Louis Franklin and Reba Mae (Steward) Edwards. She passed away on Sunday, April 22, 2018, at the Creston Specialty Care in Creston, Iowa, at the age of 86.

Joan was raised on a farm near Orient and graduated from Richland High School in 1949. She was united in marriage to Francis David on October 28, 1950, in the Fontanelle United Methodist Church Parsonage. To this union four children were born: Dean, Daniel, Arlene and Dallas.

They made their home in Union County. In 1955, they purchased the farm where they lived until Joan entered the nursing home in 2017. Joan was a housewife and worked as a nurse's aid at the Good Samaritan Society in Fontanelle.  She also worked in the kitchen at Orient Sale Barn. She enjoyed sewing, quilting, gardening and especially her family.

She was preceded in death by her parents; husband, Francis in 2006; and mother and father-in-law, Bertha and Clarence David.

To order memorial trees or send flowers to the family in memory of Joan David , please visit our flower store.
Send a Sympathy Card