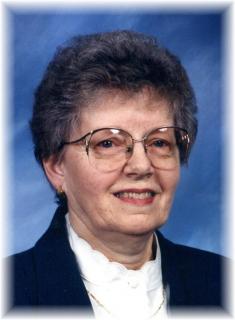 Funeral Services: Will be held on Tuesday, July 8, 2014, at 11:00 a.m. at the Fontanelle United Methodist Church with burial in the Fontanelle Cemetery. Pastor Cathy Nutting will officiate the service. A luncheon will be held at the church following the committal services at the cemetery.

Family Visitation: The family will greet friends at the church one hour prior to services on Tuesday.

Memorials: In lieu of flowers memorials are to be made to the Fontanelle United Methodist Church, Fontanelle Public Library or to the Good Samaritan Society.

Joan Ardell Wambold was born February 1, 1934, at a farm home east of Winterset, Iowa, to Elbert Leroy Wambold and Florence Rebecca Ruth Leach Wambold. Joan passed away on July 2, 2014, after an over 18-year-long battle with cancer.

Joan attended rural schools and graduated from Greenfield High School in May of 1952.

Joan married Harvey Delano Wallace, son of Clyde and Ollie Dunkerson Wallace on December 21, 1952. She worked as a telephone operator at the United Telephone Company in Greenfield, Iowa, and the Adair County State Bank in Greenfield. While Harvey was in the Army, she worked at the Army Finance Center at Fort Benjamin Harrison in Indianapolis, Indiana. Joan also worked for eight years at the Fontanelle Public Library.

Family was the most important part of Joan’s life. She was a kind and generous caretaker. She was proficient in many types of handiwork, both creative and practical. Her home was immaculate and she was an ever-prepared hostess. She enjoyed cooking and baking. Her food was a delight to all and many times of sharing this food, stories and laughter around the table will make lasting memories for her family.

To order memorial trees or send flowers to the family in memory of Joan Wallace , please visit our flower store.
Send a Sympathy Card