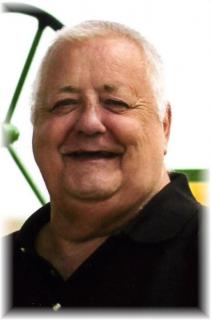 Celebration of Life Services: Will be held on Wednesday, December 17, 2014, at 11:00 a.m. at the Trinity Christian Church in Bridgewater. Pastor David Clark will officiate the service. Full military rites will be held at the church by the Anita American Legion Post No. 210. A luncheon will immediately follow the military service at the church.

Family Visitation: The family will greet friends on Tuesday evening from 5:00 p.m. to 7:00 p.m. at the Steen Funeral Home in Massena.

Memorials: In lieu of flowers memorials may be made to the John Greenwalt memorial fund to be established by the family.

John Leroy Greenwalt was born on May 29, 1945, in Mineral Wells, Texas, the son of Harold and Maxine (Sisler) Greenwalt. He passed away on Friday, December 12, 2014, at the Cass County Memorial Hospital in Atlantic, Iowa, at the age of 69.

John graduated from C&M Community School in 1963 and worked for the Rock Island Railroad until his marriage. On August 26, 1965, he was united in marriage to Caren Bagshaw and they are the parents of three children, Stacey, Aaron and Tyson.

In 1967, John entered the Army and served in the Vietnam War. He was awarded the Bronze Star, 2 Purple Hearts and the Air Medal. John’s medals meant very little to him, he would always say “Coming home alive and in one piece was the highest medal any man could receive."

After John’s tour of duty he returned to Massena and worked for Publishers News in Atlantic and Schildberg Construction. In 1973, Caren and John purchased the Standard Station and Café in Massena. It became John’s APCO and he earned the nickname APCO; which has stuck ever since; also at this time he built C&J’s Car Wash; which is still there today.

John’s friends ranged far and wide and he never met a stranger. He was a self-taught man and very knowledgeable. He would spend hours & hours on the computer learning about everything and keeping up on world affairs.

John was a book of knowledge for his children. They talked to him everyday and they now wonder how they will go on without his help and advice. He always had a solution for their problems.

John was a people person and he loved children and they seemed to gravitate to him. He had a special place in his heart for a special young man Cody Reineke of (Dumb and Dumber). His greatest joy and love of all was his grandsons, Tristan, Devin, Kaden and Mason; they were perfect and could do no wrong. The boys’ favorite saying was “just ask papa he’ll get it for us”.

He was preceded in death by his parents; father and mother-in-law; and brother, Bill Greenwalt.

To order memorial trees or send flowers to the family in memory of John Greenwalt , please visit our flower store.
Send a Sympathy Card