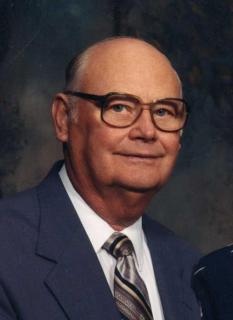 Visitation: Monday, August 30th, at Steen Funeral Home in Greenfield from Noon to 8:00 p.m. with the family greeting friends from 6 to 8 p.m.

Memorials:  To the John Guikema memorial fund to be established later by the family.

John Guikema was born on September 13, 1924, in Reeman, Michigan, the son of John and Marthalena (VanBrugen) Guikema.  He passed away on Saturday, August 28, 2010, at the Greenfield Manor in Greenfield, Iowa, at the age of 85.

John was raised and educated in Reeman, Michigan.  He attended Emmaus Bible School in Chicago and then in Toronto, Canada, where he met his wife, Irma.  He lived in Toronto for one year while waiting for Irma’s Visa to come to the U.S.  On September 24, 1949, he was united in marriage to Irma Fern Ruth Byers in the Gilead Gospel Chapel in Toronto, Ontario, Canada.  They moved to Muskegon, Michigan, in 1950 and then to Greenfield in 1952.  John worked for Fontanelle Implement for a few years before taking a position with the City of Greenfield.  He retired in 1990, after 33 years of service to the people of Greenfield.

He accepted the Lord Jesus Christ as his Lord and Savior when he was nine years old and he sought to serve Him every day of his life.  He loved his family and ministry at the Greenfield Gospel Chapel.

He was an elder at the Greenfield Gospel Chapel, member of the American Public Works Association, Greenfield Senior Citizen Housing Board, was a school bus driver for Orient-Macksburg schools, and drove bus for Southern Iowa Trolley after his retirement.

He was preceded in death by his parents and several brothers and sisters.

The family of John Guikema wishes to express their gratitude for all acts of kindness shown to them in their time of sorrow and invites you to join them for a luncheon at the Greenfield Gospel Chapel following services at the cemetery.

To order memorial trees or send flowers to the family in memory of John Guikema , please visit our flower store.
Send a Sympathy Card