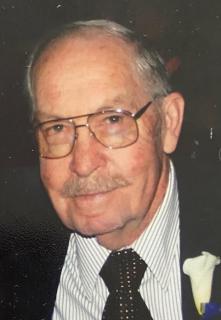 Mass of Christian Burial: Will be held on Saturday, June 12, 2021, at 10:00 a.m. at the St. John’s Catholic Church in Greenfield. Burial in the Greenfield Cemetery with an honor guard from the Iowa State Patrol and military graveside rites conducted by the Greenfield American Legion Head-Endres Post No. 265 and V.F.W. Post No. 5357. A luncheon will be held at the church following the committal services at the cemetery. Father Ken Gross will officiate the service. The Steen Funeral Home of Greenfield is in charge of professional arrangements.

Family Visitation: The family will greet friends on Friday evening at the St. John’s Catholic Church in Greenfield from 5:00 p.m. to 7:00 p.m.

Memorials: May be directed to St. John’s Catholic Church.

John Louis Novy was born on October 7, 1932 at the family home in rural Adams County, Iowa, the third son of Edd & Lily (Strompp) Novy. He passed away at the age of 88 on December 12, 2020 at the Adair County Memorial Hospital.

John was raised on a farm in Adams County and attended grade school in Nevinville. After graduating from Cromwell High School in 1950, he worked for Adams County prior to being drafted in 1953 at the end of the Korean War and serving with the United States Army in Japan as an MP. After returning from service, he married Jean Marie Jennings on February 18, 1956 at St. Patrick’s Catholic Church in Lenox, Iowa. John and Jean started their married life together in Creston with John working at Gits Manufacturing until being hired onto the Iowa Highway Patrol in 1957 and relocating to Guthrie Center where they lived until moving to Greenfield in the summer of 1966. “Big John” continued on as a State Trooper until he retired after 30 years of service in August of 1987. After retiring, John began working “on the other side of the law” as he would say, as a truck driver for G & H Motor Freight in Greenfield. At his retirement party, John made the statement that he had gotten tired of being assigned to working Section 3-4 East West on I-80 and was happy finally being able to work Northbound I-35.

John and Jean, together for 64 years and nearly 10 months, raised 12 children and enjoyed all the fun and excitement that came along with that task. There were many phone calls from the Principal, late night worries when the phone would ring, fender benders, broken down vehicles and many family road trips often needing more than one vehicle to get to where the family was going. John drove many car loads of kids and teens to Riverview Park and later Adventureland Park in Des Moines. He put up with a constant houseful of not only his own kids, but many friends rolling in and out all the time.

John was a tough guy and raised his kids to be strong and independent. He expected the best behavior, which he didn’t always get, but was always there to help them out in any situation. He taught his 7 boys how to hunt and handle a firearm. He taught his kids how to fix their own cars, change a tire and change oil. He had a dry sense of humor, combined with his tough guy looks, that often took people off guard...which made those that knew him well... even more entertained by his humor. He loved classic cars and auto racing, hunting, and visiting the family farm.

Uncle John was loved by his many nieces and nephews, and feared by a well-deserving few. Grandpa John loved his 24 grandchildren, but might turn into Grumpa from time to time when they got a bit too loud and rambunctious. He particularly enjoyed the babies and loved his 8 little great grandchildren. John enjoyed hearing about his grand-dogs and grand-cats and particularly loved his own cat Floyd aka “Frank”...who loved no one else besides John.

John loved driving of all kinds: bicycles as a kid, stock cars as a teen, pickup trucks, classic cars and Cadillacs. He was known by his fellow Troopers to be the best driver most had ever ridden with...even though he may have wrecked his fair share of state vehicles. He drove cars back and forth to Kansas City for local car dealer friends in Greenfield and Creston and, of course, enjoyed driving the big rigs, as well. John loved spending time on his motorcycle with Jean and friends whether cruising somewhere for breakfast on their Hondas or taking long weekend motorcycle trips.

John was preceded in death by his parents; older brothers Leo and his wife Doris; and Glenn and his wife Bernice.

The family would like to express their deepest gratitude for the overwhelming love and support to all those who have reached out during this time. We encourage friends to share their memories and sympathies with John’s family using Steen’s online condolences at www.steenfunerals.com.

To order memorial trees or send flowers to the family in memory of John Novy , please visit our flower store.
Send a Sympathy Card