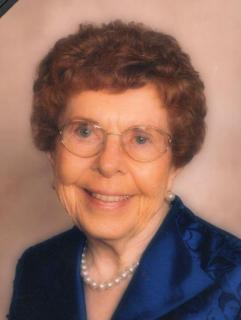 Funeral Services: Will be held on Tuesday, March 5, 2019, at 10:30 a.m. at the Immanuel Lutheran Church in Greenfield with burial in the Greenfield Cemetery. A luncheon will be held at the church following the committal service at the cemetery.

Family Visitation: The family will greet friends on Monday evening at the Steen Funeral Home in Greenfield from 5:00 p.m. to 7:00 p.m.

Memorials: To the Juanita Wood memorial fund to be established by the family.

Juanita Marie Weber Wood was born December 2, 1921 to John Henry and Gertrude (Schrader) Weber in Greenfield, Iowa. She passed away on Saturday, March 2, 2019, at The Village in Indianola, Iowa, at the age of 97.

Juanita grew up in Greenfield and received her education at the Greenfield Public Schools. She graduated from Greenfield High School in 1939. After graduation she attended Simpson College in Indianola. On November 17, 1946 she was united in marriage to Dale R. Wood. To this union two children were born, Dale and Dee Ann.

Juanita was member of the American Legion Auxiliary, a Boy Scout Cub Den leader for several years and during the polio epidemic, served as the Adair County chairman for the March of Dimes.

To order memorial trees or send flowers to the family in memory of Juanita Wood , please visit our flower store.
Send a Sympathy Card