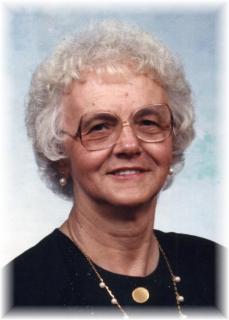 Funeral Services: Will be held on Monday, June 10, 2012, at 10:00 a.m. at the Emmanuel Lutheran Church in Fontanelle with burial in the Greenfield Cemetery.  Pastor Steven Broers will officiate the service.

Memorials: Memorials may be made the June Schmidt memorial fund to be established by the family.

Dorothy June Anthonsen Schmidt was born in Warren County, Pennsylvania on December 24, 1927. In 1929, she went to make her home with Marinus and Pearl Anthonsen in southwestern New York state.

June attended elementary schools in New York and Iowa and graduated from Fontanelle High School in 1945. She later graduated from a commercial school in Omaha, Nebraska and was employed by Northwestern Bell Telephone Company in Omaha for 2 years.

On November 15, 1947 she was united in marriage to Wilmer Schmidt at Immanuel Lutheran Church in Greenfield. They made their home in the Yakima Valley in Washington State for 8 years before returning to the Fontanelle area in the fall of 1955. In the spring of 1959, they moved to their farm northeast of Greenfield and lived there until September 2000, when they moved to Greenfield.

June was baptized and confirmed on June 27, 1948 in Grandview, Washington and was a member of Emmanual Lutheran Church in Fontanelle.

June was a wife, mother and homemaker throughout her life, and at times, employed outside the home as a bookkeeper and secretary. She was a member of the Women of ELCA and served as secretary of open class entries at the Adair County Fair for many years. June enjoyed sewing, cross-stitch, playing cards, Scrabble and solving puzzles.

June is preceded in death by her husband, Wilmer, her parents and infant daughter, Susan.

To order memorial trees or send flowers to the family in memory of June Schmidt , please visit our flower store.
Send a Sympathy Card