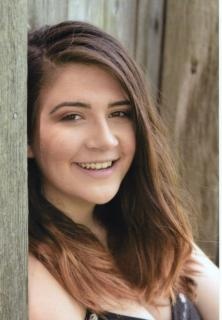 Funeral Services: Will be held on Sunday, August 11, 2019, at 2:00 p.m. at the Nodaway Valley High School in Greenfield with burial in the Greenfield Cemetery. Please wear what makes you! Suit, Dress, Flannel, etc.  Rev. Charles Spindler of the Crest Baptist Church in Creston will officiate the service.  A luncheon will be held at 16 Oaks in Fontanelle following the committal service at the cemetery. The Steen Funeral Home in Greenfield is in charge of the professional arrangements.

Memorials: To the Kayci Emerson memorial fund established at the FNB Bank in Greenfield and Fontanelle.

Kayci Marie Emerson was born in Atlantic, Iowa and despite her desires to travel and explore the world, she spent most of her life in Fontanelle and Greenfield. Since she was young, Kayci was full of hopes and larger than life dreams. When she was little she was always dancing, singing, laughing, and putting on a show for anyone who would watch. Performing was always a large part of Kayci’s life. She started dance classes as soon as she was able to walk, and began her acting career on the Albany High School stage shortly thereafter.

Every time she was at Grandma and Grandpa Rothe’s she was always outside playing with all of the animals that she encountered. Her favorite was Grandpa and Kayci’s dog, Sniffy. You could never keep Kayci inside, she was always off adventuring, exploring, and getting into everything she possibly could. Her life at Grandma and Grandpa’s consisted of dress up with Grandma, constantly doing her makeup, putting her hair in crazy ponytails, and styling PopPop’s beard.

One of Kayci’s favorite activities was participating in theater and being on stage. She didn’t care what she was doing, as long as she was able to help in any way. Her many positions included acting, props, lights, makeup, and costume design. You could always find her running around on stage or hanging out behind the scenes, but Kayci couldn’t stay out of the spotlight for long. One of Kayci’s many other passions was makeup. It seemed like she left glitter everywhere she went. It was a rare event when she didn’t have her eyebrows perfectly applied and highlight glowing to the gods.

Kayci was going to attend Graceland University in the fall, where she was planning on majoring in theater. That was one of the biggest goals she had her heart set on. She kept saying that she wanted to skip graduation and summer just to get off to college and achieve what she set her mind to. There was never a time where she wasn’t talking about getting out and starting a new chapter of her life.

Kayci was always a joy to be around, she would light up every room she walked in with her sassy attitude and sly comments. When she really liked you, she wasn’t afraid to make fun of you. There was never a time where she wasn’t cracking jokes or making sarcastic remarks about everything around her. Kayci was radiant; she gave off an energy that was impossible to ignore. It’s safe to say that Kayci was truly happy, and ready to begin the rest of her life. Anyone that knew her would quickly say that she made a large impact on their life and that she was truly unique in every way possible. Kayci was loved by all and the world will be an entirely different place without her in it.

To order memorial trees or send flowers to the family in memory of Kayci Emerson , please visit our flower store.