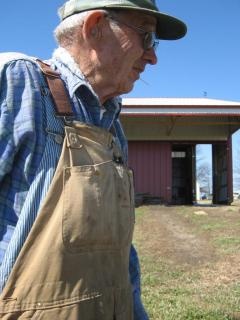 Keith wished to be cremated and his cremains will be interred in the Greenfield Cemetery.

Open Visitation: Will be held on Thursday, September 3, 2015, from 2 to 8 p.m. at the Steen Funeral Home in Greenfield.

Family Visitation: The family will greet friends at the Steen Funeral Home in Greenfield on Thursday evening from 6 to 8 p.m.

Memorials: Memorials: To the Adair County Historical Society or to the organization of your choice.

Wendell Keith Frizell “Keith” was born in his parents’ home east of Greenfield on December 2, 1924. He was the firstborn child of parents Elmer Ellsworth Frizell and Gladys Mildred (Gile) Frizell. He passed away at the Greenfield Rehabilitation and Health Care Center on August 30, 2015. Keith was an exceptional farmer, and lived and farmed in Adair County his entire life.

His childhood years were spent on farms, both helping his father farm and playing with his brothers. Drafted into World War II, Keith joined the US Navy in 1945. After completing basic training at Great Lakes Naval Center in Chicago, Keith was accepted into a radar training school at Treasure Island, California. The war ended while Keith was in training, and he returned to Adair County, remaining there for the rest of his life.

When his father suffered a stroke in 1949, Keith and his four brothers took over much of the work on the family’s farm. He later purchased the family farm, which became an Iowa Century Farm in 1982. In 1965, he purchased the Katie/Annora Culver farm and worked that farm in addition to the Frizell farm, eventually farming a total of 360 acres. Keith was a conscientious and skilled farmer, dedicated to conserving the land for future generations. For his efforts, which included terrace building, grass waterways, tiling, and no-till farming methods, he was given a regional Iowa Soil Conservation Achievement award in 1972.

Keith had no children of his own, but he was a wonderful uncle to his nieces and nephews. Along with hard work, there was also time for fishing in one of the farm ponds, for example, or rides to the field in a new/old pickup or on the back of a trail bike or three wheeler.

As he grew older, Keith began collecting older and antique tractors and also found time to attend Red Power, Old Threshers, and other tractor shows in Iowa and surrounding states. By the time of death, he counted approximately 25 tractors in his collection. Much of his tractor collection, along with tractors belonging to brothers Clyde and Ivan, were displayed on his farm as part of the Adair County Historical Society Heritage Tractor Ride in the summer of 2013. Although his health was failing at that time, Keith was outside on his four-wheeler Honda the day of the ride, answering questions and telling people about the individual tractors.

Keith was a long-time member of the Greenfield United Methodist Church.

Keith was preceded in death by his parents, his brothers Dallas (stillborn) and Ivan, grandparents, uncles, aunts, and other relatives

To order memorial trees or send flowers to the family in memory of Keith Frizell , please visit our flower store.