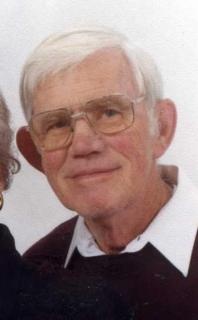 Mass of the Ressurection: Thursday, December 23, 2010, at 10:30 a.m. at the St. John’s Catholic Church in Greenfield with burial of cremains in the Greenfield Cemetery. Full military graveside rites will be conducted by the Greenfield American Legion Head-Endres Post No. 265 and VFW Post No. 5357.

Memorials: To the Adair County Memorial Hospital or the St. John’s Catholic Church.

Keith attended grade school in Chariton and Woodward and graduated from Woodward High School in 1953. He served his country in the United States Army from 1954 to 1957. He then went on to graduate from Iowa Methodist School of X-Ray in 1960. He worked for the Adair County Memorial Hospital in Greenfield as a lab and X-Ray Technician for thirty-four years.

Keith was a member of the St. John's Catholic Church and the American Registration of X-Ray Technicians. He was an avid fisherman, hunter, enjoyed going to the casino, and he was very proud of his family. His grandchildren were a special joy to him.

He was preceded in death by his parents; and two brothers, John and Donald Gray.

To order memorial trees or send flowers to the family in memory of Keith Gray , please visit our flower store.
Send a Sympathy Card