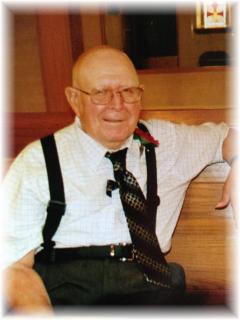 Celebration of Life Services: Will be held on Friday, February 14, 2014, at 10:30 a.m. at the St. Peter’s United Church of Christ, rural Massena with burial in the Victoria Township Cemetery. Pastor James Hansen will officiate the service. A luncheon will be held at the Legion/Lion Hall in Massena following the service.

Family Visitation: The family will greet friends on Thursday evening, Feb. 13th, at the Steen Funeral Home in Massena from 5:00 p.m. to 7:00 p.m.

Memorials: To the Keith Kerkmann, Sr. Memorial Fund to be established by the family at a later date.

Keith Walter Kerkmann, Sr. was born May 4, 1925, in Cass County, Iowa, the son of Walter and Avis (Helvie) Kerkmann. He passed away on Monday, February 10, 2014, at the Cass County Memorial Hospital in Atlantic, Iowa, at the age of 88.

Keith was raised on the family farm south of Massena and graduated from Massena High School in 1943. After graduation Keith farmed the family farm. On December 21, 1949, he was united in marriage to Shirley Bertram at the First Baptist Church in Shenandoah, Iowa. To this union two children were born: Laura Lee and Keith, Jr. In 1976, he moved off the farm and took over Kerkmann Insurance Agency in Massena.

Keith was a lifelong member of the St. Peter’s United Church of Christ, serving as an active board member and treasure. He was a member and dispatcher for the Massena Fire Department, filmed Cumberland and Massena home football games, member of the Massena Lions Club, Chamber of Commerce, Two Cylinder Club, Anita Flight Club, and served as mayor of Massena from 1992 to 1993.

Keith enjoyed setting up the sound system for church and community events. He loved inventing, building, and tinkering in his shop on the farm and also when he moved to town. He enjoyed gardening, flying airplanes and making and flying model airplanes. Keith was a quiet man who was always willing to lend a helping hand to anyone. But most of all he loved and cherished his family and friends.

He was preceded in death by his parents and daughter, Laura Lee Beattie.

He is survived by his son, Keith "Butch" Kerkmann, Jr. and wife Kathy of Massena; grandchildren, Jenna Watson and husband Chris and children Brooke, Brady and Bryce, Kylie Freund and husband Kevin and children Frank, Walter, Vincent and Macy, Amanda Knuth and husband Andrew and children Avery, Alivia and Arianna, Jace Beattie and wife Beth and children Cohen and Jet, and Casey Kerkmann and wife Megan and children Madalyn and Asher; son-in-law, Jim Beattie of Montgomery City, Missouri; other relatives and friends.

To order memorial trees or send flowers to the family in memory of Keith Kerkmann , please visit our flower store.
Send a Sympathy Card