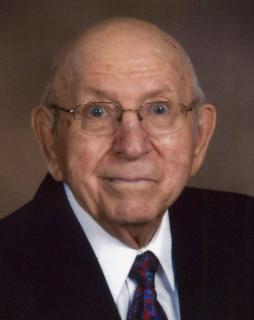 Funeral Services: Will be held on Thursday, May 10, 2018, at 10:30 a.m. at the United Methodist Church in Greenfield with burial in the Greenfield Cemetery with full military graveside rites by the Greenfield American Legion Head-Endres Post No. 265 and V.F.W. No. 5357. A luncheon will be held at the church following the committal services at the cemetery. Pastor Eric Schubert will officiate the service.

Memorials: May be made to the Keith Kinyon memorial fund to be established by the family at a later date.

Keith attended rural school in Lee Township and graduated from Greenfield High School. In 1942, he joined the Navy Air Corps and was trained to be a fighter pilot. Upon graduation he became an Ensign and continued the war effort later as a flight instructor.

On June 15, 1945, he was united in marriage to Myrtle McNeley. To this union three children were born: James, Patricia and Carol. They raised their family on a farm south of Greenfield now known as the Neely-Kinyon Research Farm. They lived on this same farm for nearly 50 years. Upon leaving the farm Keith and Myrtle bought a home in Greenfield. They spent 14 winters in Arizona where they had many friends.

Keith was an avid gardener. He was a long time member of the Greenfield United Methodist Church and a 70 plus year member of the American Legion Post No. 265 and a past commander. He was a friend to all in the community.

He was preceded in death by his parents; wife, Myrtle in 2015; three brothers, Wayne, Rex and Jack; and sister Velda Hovendick.

To order memorial trees or send flowers to the family in memory of Keith Kinyon , please visit our flower store.
Send a Sympathy Card