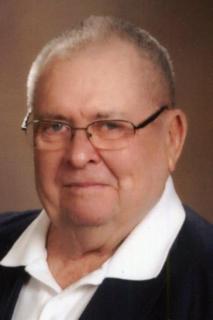 Funeral and Masonic Services: Will be held on Monday, January 23, 2017, at 10:30 a.m. at the Orient United Methodist Church with burial in the Greenfield Cemetery. Pastor Cathy Nutting will officiate the funeral service.  The Masonic Circle Lodge No. 555 of Prescott is conducting the masonic service.  A luncheon will be held at the church following the committal services at the cemetery.

Family Visitation: The family will greet friends on Sunday from 3:00 p.m. to 5:00 p.m. at the Steen Funeral Home in Greenfield.

Memorials: Memorials may be directed to the Kenneth Blazek memorial fund to be established by the family at a later date.

Kenneth Glen Blazek was born December 22, 1934, the son of Glen and Velma (Duben) Blazek in rural Adams County, Iowa. He passed away on Wednesday, January 18, 2017, at the Adair County Memorial Hospital in Greenfield, Iowa, at the age of 82.

Kenneth attended school in Richland and graduated in 1952. On August 8, 1954, he was united in marriage to Estelle Westphal in Fontanelle, Iowa. To this union six children were born: Wesley, Phyllis, Arlan, Joy, Mary and Steven.

He was preceded in death by his wife, Estelle, his parents, Glen and Velma Blazek, father-in-law and mother-in-law Ralph and Lucy Westphal, brothers Lawrence and Bill, sister Faye, and great grandson Wyatt.

To order memorial trees or send flowers to the family in memory of Kenneth Blazek , please visit our flower store.
Send a Sympathy Card