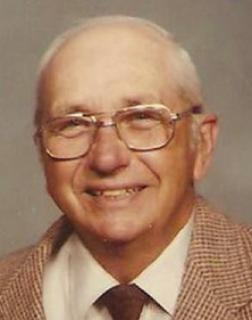 Funeral Services: Will be held on Wednesday, May 3, 2017, at 10:30 a.m. at the Emmanuel Lutheran Church in Fontanelle with burial in the Fontanelle Cemetery. A luncheon will be held at the church following the committal services at the cemetery. Pastor Steven Broers will officiate the service. The Steen Funeral Home in Fontanelle is in charge of the professional arrangements.

Family Visitation: The family will greet friends on Tuesday at the Steen Funeral Home in Fontanelle from 4:00 p.m. to 8:00 p.m.

Memorials: Memorials may be made to the Kenneth Miller memorial fund to be established by the family.

Kenneth George Miller was born on August 26, 1919, to Carl Miller and Marie Kiefer Miller, in Jackson township, Adair county, Iowa. He passed away on April 27, 2017, at the age of ninety seven years and eight month at the Good Samaritan Center in Fontanelle, Iowa, where he had lived for six years. The staff there endearingly called him “Kenny”.

His goal as he lived farther into his 90’s was to be the longest living and oldest descendant of Henry Traugott Miller, his grandfather. He achieved that goal and then he decided he was ready for his journey to heaven to see his wife, Eleanore (Ellie), who had died in 2010.

He attended Jackson no.1 school, which was down the hill from the farm where he grew up. In 1933, when he took the high school admittance test which all eighth graders were required to take at the time, he received the highest score in the county. He then attended high school in Fontanelle, Iowa, where he played basketball, ran in track, worked on the newspaper and yearbook, and served as vice president of his senior class.

During high school he took a year of “normal training” to be a teacher. He taught for several years before he married Eleanore Bittner on April 15, 1941. They first lived on a farm near Berea in north western Adair County. In 1945 they built a house on his home farm on section 11 of Jackson Township. There they raised their two daughters, Marilyn and Jeanette.

Not one to sit still for long and always on the go and working, Kenneth farmed 550 acres, buying two farms after his daughters had graduated from college. He and Eleanore’s children were told from the time they were toddlers that they were going to college, and were not going to get married until they finished college. They felt academic achievement was important, and both of their daughters got their college degrees to be teachers.

Kenneth was always working and had several “irons in the fire” at once. He did custom combine work with a one row Gleaner combine and sold DeKalb seed corn in addition to farming over 550 acres. He also started and ran Ken’s Korn, a sole proprietorship farm grown popcorn business for many years. Besides growing white and yellow popcorn, he methodically tested the popcorn for the correct moisture content, and bagged it in two pound plastic bags that had “Ken’s Korn” written in a big red and blue logo on the outside. This business was his pride and joy and he delivered the popcorn to grocery stores within a 50 mile radius of where he lived. He was well known for being extremely perfectionistic and particular with his popcorn business.

As if he did not have enough going on, he also went to Muscatine in eastern Iowa where watermelons were grown. He brought back truckloads of melons and sold them.

For many years he worked on local elections at Jackson center school, served on the elevator board, taught Sunday school, and served on the church council as treasurer. He didn’t sit still long and was addicted to action.

When Kenneth and Eleanore retired from farming, they spent the winters in Coolidge, Arizona, for a number of years. They lived in a mobile home court where many people from Iowa lived. There they had frequent visits from family and friends from Iowa who wanted to get away from the cold Iowa winters. They also took trips to Mexico City, Canada and Hawaii.

To order memorial trees or send flowers to the family in memory of Kenneth Miller , please visit our flower store.