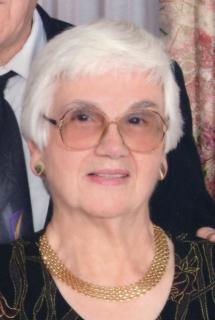 Mass of Christian Burial: Will be held on Tuesday, January 7, 2020, at 10:30 a.m. at the St. John’s Catholic Church in Greenfield with burial in the Greenfield Cemetery. A luncheon will be held at the church following the committal services at the cemetery. Father Phillip Bempong will officiate the service.

Family Visitation: The family will greet friends on Monday evening at the Steen Funeral Home in Greenfield from 5:30 p.m. to 7:00 p.m.

Memorials: May be directed to the LaDonna Morgan memorial fund to be established by the family.

LaDonna Mary Morgan was born July 22, 1932, in Orient, Iowa, the daughter of Henry Frank and Minnie Anne (Krabiel) Repplinger. She passed away on Wednesday, January 1, 2020, at The Village in Indianola, Iowa, at the age of 87.

LaDonna was raised in Orient and graduated from Orient High School. On October 30, 1953, she was united in marriage to Morris Morgan. To this union four children were born: Greg, Kathy, Nancy and Doug. She farmed with Morris on their farm north of Greenfield until retiring in 1996. LaDonna enjoyed reading books, was a great grandmother to her grandchildren, loved music, playing the piano, decorating cakes and she really enjoyed the hogs they raised on the farm. She was a member of the V.F.W. Auxilary, St. John’s Catholic Church and the Altar and Rosary Society.

She was preceded in death by her parents; husband, Morris Morgan; three brothers, Deole, Lowell and Ronald Repplinger; and sister, Shirley Woosley.

To order memorial trees or send flowers to the family in memory of LaDonna Morgan , please visit our flower store.
Send a Sympathy Card