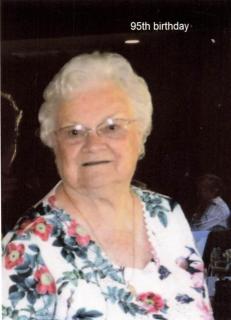 Public Graveside Services: Will be held at the Reno Methodist Cemetery, south of Cumberland on Monday, October 5, 2020, at 2:00 p.m. The Steen Funeral Home in Massena is in charge of the professional arrangements.

Memorials: May be directed to the Larie Erickson memorial fund to be established by the family at a later date.

Florence Larie Erickson was born September 5, 1922, in a sod house near Colby, Kansas, the daughter of Ed and Minnie (Cecil) Merritt. She passed away on Thursday, October 1, 2020, at the Allen Place in Atlantic, Iowa, at the age of 98.

Larie moved from Kansas to Iowa at the age of 5 and lived the rest of her life in Edna Township in Cass County, Iowa. She attended Cumberland High School and upon graduation taught country school. She was united in marriage to Wayne Erickson on December 6, 1941, in Maryville, Missouri. To this union three children were born: Donna Mae, Mary Ann and Rex Allen.

Larie enjoyed over 50 years as a member of the Happy Homemakers Club and served as a 4-H Leader with the Edna Willing Workers as her daughters were members. She enjoyed quilting and embroidery work for many years as well as gardening, canning and raising flowers. She loved to read the Kitchen Klatter, Cappers Weekly as well as books about the prairie life and later "Our Iowa" magazine until her vision became bad. She always enjoyed her childhood friend, Helen Mullen of Corning. Wayne and Larie enjoyed taking fishing trips and visiting relatives out of state. She loved spending time with her family and grandchildren.

To order memorial trees or send flowers to the family in memory of Larie Erickson , please visit our flower store.
Send a Sympathy Card