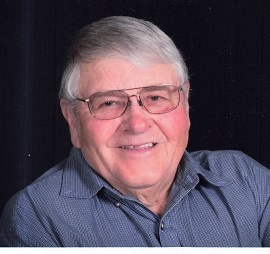 Funeral Services:  Will be held on Wednesday, May 25, 2022, at 10:00 a.m. at the Emmanuel Lutheran Church in Fontanelle, Iowa, with burial in the Fontanelle Cemetery. A luncheon will be held at the church following the burial.  Pastor Steven Broers will officiate the service.  The Lamb Funeral Home in Fontanelle is in charge of the professional arrangements.

Memorials:  May be directed to the Fontanelle Fire Department or to the Emmanuel Lutheran Church in Fontanelle.

Larry David Gross (Poncho) was born May 3, 1938 on a farm north of Bridgewater, Iowa.  He was the middle child of Arthur Lorenz Gross and Elva Mae Kembery Gross.  Within the year, they moved north of Fontanelle, Iowa to the home place.  He attended Summerset #2 to 6th grade, then attended Fontanelle School until his junior year.  Then he took correspondence courses for junior and senior years through American School of Chicago, graduating in 1956.

Larry farmed with his Dad until 1958.  He volunteered for military service and was classified 4F and was unable to serve for medical reasons. He married Kathryn Marie Ross on December 21, 1958 at Emmanuel Lutheran Church.  To this union two daughters were born Wendy and Cindy.   They moved to Orient, Iowa and farmed with his father-in-law for two years and then owned and operated the Sinclair Oil station until March 1962.  At this time the family moved north of Fontanelle to the home place.  He farmed in partnership with his father until Art retired and then he bought out the partnership.  The farm has been a Century farm for several years, but was awarded the Century Farm award in 2021.

He enjoyed hunting, fishing, canoeing, picnics, riding Harleys, four-wheelers and snowmobiling down the river.  He enjoyed using his John Deere machinery sowing and harvesting bountiful crops and feeding cattle and pigs (pigs not so much).  The last few years he has enjoyed taking his UTV around the farm with his dog, Dobie, and visiting neighbors.

He was preceded in death by his parents, brother Richard and sister Evelyn.

To order memorial trees or send flowers to the family in memory of Larry "Poncho" Gross, 84, of Fontanelle, please visit our flower store.

Burial will be in the Fontanelle Cemetery with a luncheon following burial at the church.