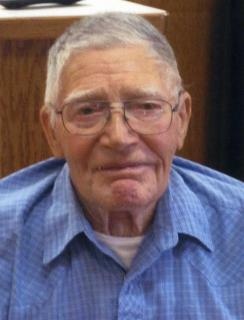 Memorial Services: Will be held at a later date.

Memorials: To the Lawrence Vorrath Memorial Fund to be established by the family.

Lawrence Nelson Vorrath was born September 4, 1912, to John Henry and Bessie (Bayman) Vorrath in Adair County, Iowa. He passed away on Monday, May 30, 2011, at the Good Samaritan Society in Fontanelle, Iowa, at the age of 98.

Lawrence was raised and lived his entire life in Adair County, Iowa. He attended rural schools and then helped his dad on the family farm. On November 10, 1935, he was united in marriage to Lucille L. Davis in the Greenfield United Methodist Church. To this union two children were born, Gary and Marleta. They farmed for many years in Adair County then moved into Greenfield where he started his own trucking business, L.N. Vorrath Trucking, which he operated for many years.

Lawrence enjoyed wood working, traveling, and going to coffee and visiting with his friends. He was a member of the Greenfield United Methodist Church.

He was preceded in death by his parents; five brothers, Don, Orley, Floyd, Cleo, and Leo Vorrath; and two sisters, Nettie Stuva and Thelma Stuva.

To order memorial trees or send flowers to the family in memory of Lawrence Vorrath , please visit our flower store.